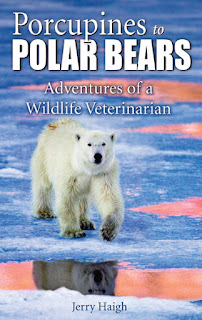 One problem that needed a quick solution was the noise emitted when blowing into the pipe. It is a noise that should at all costs be avoided when in polite company. Many readers will admit, under pressure, that in private the noise is associated with warming of the bed.
The solution was simple. A mouthpiece did double duty. It cut out the noise and ensured that all the effort in the puff propelled the dart with maximum power.
On one occasion a call from the city police meant that I had to deal with a situation outside the zoo. The tool came into its own. An invasion of a home by a white-tailed deer needed urgent action.
In fall young males are often driven off by big bucks wanting to ensure that any females became their sole (or is that soul?) mates.
Under normal circumstances the youngsters head off into the countryside. But on this and other occasions the young deer seem to lose their minds. .
A buck had leapt through the picture window of a house with a fine view of the university buildings across the South Saskatchewan River. Two ladies of a certain age were enjoying a quiet cup of tea. Their afternoon view underwent a dramatic change.
The deer had no doubt come up from the bush-lined river bank. Naturally it panicked when it found itself in the unfamiliar environment of a city sitting room. Soon there were shards of bone china mixed with the shattered glass of the window. The ladies wisely retreated and made the call. When I arrived some fifteen minutes later the room lacked what I assumed was its former pristine state. The sofa was shredded. The carpet was decorated with a fresh stain of something dark wet and smelly. Several flowers lay scattered among greenery beside the coffee table.
The deer was standing still, no doubt bemused in unfamiliar surroundings. A drug-filled dart with its bright red woollen tail soon had the young buck down and out. Thence into the zoo truck and away to a wooded spot some fifteen kilometres from the city limits. Into the jugular vein went an antidote to the immobilizing mixture Thirty second later it was up and away, without even a look back of thanks.
Posted by Jerry Haigh at 7:10 PM

Jerry, as a wildlife vet, what are your thoughts about the gorilla shot and killed in the zoo to protect the child? In my opinion, people were too quick to condemn the zoo for not using tranquillisers...

Jess, there are a few things to think about. One previous encounter (a rescue highlighted as an act of God!) was by a female. The other was by a silver back in UK. This child fell near or into water. This gorilla was agitated and the screaming of the crowd upset him. He dragged ths child through the water. The alligator in Orlando incident resulted in a drowning. Would the same have happened to this child?

What would have happened had the child drowned if the delay for drugs had occurred?

The staff were on the horns of a dilemma. What is also ignored is the statement that this animal is a member of a critically endangered species. That is correct, but this animal had a zero chance of contributing his genes to the wild population. Maybe even to the captive one.

There is an interesting discussion and footage at this site: https://www.youtube.com/watch?v=4W-0DRFIBr4

On an slightly related issue I had not realized that the family are African Americans. The parents were demonized, which is what seems to be the norm in the USA. The video has a good discussion on this.

Why are folks with a tiny percentage of African blood in them classed as blacks? Obama is not a black. He is a human of mixed descent. True white are albinos, then come the Nordic ultra blondes. I am a sort of blotchy pink. Some 'whites' are darker than others (Italians for example.) Then comes the 'browns'. In India people hope to marry a person with paler skin than themselves. The high caste Brahmins are often the palest of Indians, some paler than your 'dark' 'Italian'. Then come skin colours ranging from cafe au lait to blackboard. ,