Just back from an interesting weekend in Alberta, all of it related in some way to moose.

It started with a wedding. I’m not going to show wedding pics – I’ll leave that to the happy couple, but the bride is the daughter of a former student and long-time friend. He is Dr. Jack Williams, who graduated from the Western College of Veterinary Medicine in 1978 and one of the highlights (so he tells me) of that final year was a trip to Rochester, north of Edmonton, where I took him to help with a moose research project. In this very short video clip, edited out from a longer one that you can find here on Youtube, you can see Jack (he turns to smile at the camera) as we walk a moose out of heavy bush so that we can weigh him and have more room to change his collar.

One of the stories told at the wedding of Jack’s daughter Ashley was of how he had almost tried to commit suicide by walking backwards along the body of the helicopter towards the tail rotors. He says that had I not rugby tackled him he would have been chopped up. The wedding would certainly never have taken place, because at that time there was no Ashley.

Naturally this story will appear in my new book Of Moose and Men
Posted by Jerry Haigh at 5:52 AM No comments:


If you have returned to this blog you will now have an inkling of what my new website will look like. I hope it will be up within a week or ten days, certainly by the end of the month.

Yesterday I posted a 3 minute video to Youtube. It tells, without the benefit of a continuity staff member, how we used to capture moose for research purposes in the 1970s and 1980s. Nowadays almost all moose excpet the huge Alaskan moose, appropriately called Alces alces gigas are captured using net guns. 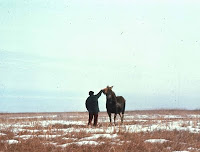 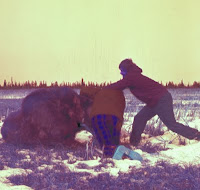 I'll let you have a look at it at the end of this post, but here are a couple of is a teaser photos.

I developed this walking with moose technique after learning something about wildlife capture and darting in Africa and applied it to moose when we needed to weigh them and would often be working in fairly heavy bush where we could not get the helicopter near them.

Here I have put a small piece of the video because the blog cannot handle too much band width. The whole thing is on Youtube.

Of course the method will also get a description in the new book I am working on. It looks as if my title will be Of Moose And Men.
Posted by Jerry Haigh at 6:08 AM No comments: 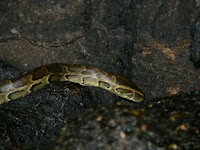 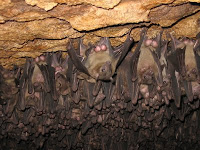 
News that a newly discovered version of the virus that causes AIDS has cropped up in a woman from Cameroon has hit several new outlets. This is no surprise. They include Wildlife Disease News Digest, Promed Ahead and the BBC web site.

The original article was published in the prestigious journal Nature Medicine. Lead author Jean-Christophe Plantier and his eight colleagues describe the finding of SIV [simian immunodeficiency virus] in a gorilla. They state that the virus

"is closely related to gorilla simian immunodeficiency virus (SIVgor) and shows no evidence of recombination with other HIV-1 lineages. This new virus seems to be the prototype of a new HIV-1 lineage that is distinct from HIV-1 groups M, N and O. We propose to designate it HIV-1 group P."

It has already been established that the two most important versions of the virus (so far) are HIV1, which crossed into humans from chimpanzees some time in the last 100 years somewhere in the Congo basin and HIV2 which came from a small nondescript monkey called the sooty mangabey, a small, almost uniformly grey monkey whose range is restricted to Upper Guinea in West Africa. In humans these two viruses are genetically less closely related to one another than they are to their original primate sources. The SIV counterparts of these two forms of HIV have been introduced into humans on at least seven different occasions.

That gorilla SIV should have crossed into a human should not surprise anyone who has followed the history of the bushmeat trade. In his 1963 autobiography On Safari Armand Denis published several remarkable photographs of gorillas that had been hunted by large gangs of Ituri hunters deep in the forests of the Congo basin. He had accompanied pygmies on a well-orchestrated hunt in the forest.

However, the Cameronian woman was living in Paris and had never been in contact with bushmeat. The article’s authors suggest that she must have acquired the infection from someone else who was carrying it. While this is the first finding of its kind, it seems likely that others will now be made. The patient was not ill, but that does not mean she will not develop AIDS.
Posted by Jerry Haigh at 7:05 AM No comments: