Conservation in action is exemplified in the video made by the group from the Democratic Republic of Congo's Gorilla Conservation group.

They are obviously having fun and doing great conservation work at the same time as they promote the use of briquettes to reduce the enormous pressure on the forests and the heavy use of charcoal. Take a look and make sure you sound is turned on. The music alone if worth listening to!

You can learn lots more about this kind of work at the Wildlife Direct Blog site here. Have fun and watch this! Then follow some of the links to see what is going on.
Posted by Jerry Haigh at 3:07 PM No comments:

Bad news for books and publshers


Bad news on the book front. In British Columbia the provincial government has suddenly withdrawn all its annual support, terminating a 22-year partnership with the non-profit society that sponsors B.C. BookWorld. The withdrawal was announced by phone, giving little notice, and the B.C. book publishers’ association and the B.C. magazine publishers’ association got the same message on the same day. Callous, calculated or what?

At the Federal level our government has made similarly draconian moves, in one of the worst cases, entirely removing a program that supported artists (of all stripes) in their overseas travels. Most artists, apart from the high profile stars, have incomes well below the so-called “poverty line” as it is defined in Canada. Being invited to travel to galleries and shows may be a two-edged sword if the organizers are unable to offer full coverage. Going to an event and taking our Canadian culture along may be impossible

Another program that has been savaged is the support for magazines through postal subsidies. If circulation is below 5000 there is no subsidy. This hits particularly hard in small population areas (like Saskatchewan) but may not affect magazines with larger catchment areas like Quebec and Ontario.

It seems to me that the politicians are forgetting that culture is at the very foundation of what we are about as humans. They all went to school. Maybe some of them hated their English teachers.

Writing is the bedrock. With writing comes reading. There you have two of the Three “R”s. Without them, we are mere cavemen, daubing ochre and charcoal on rock faces, banging, scratching and blowing on primitive instruments.
Posted by Jerry Haigh at 6:36 PM No comments:


Next week I’ll be heading south to the Frenchman River Valley, one of my favourite places in the province. The scenery is quite different than most of the rest of this part of the world, and the wildlife is also somewhat different.

A few years ago bison were brought back to the Grasslands National Park to repopulate a region where they must have existed in their thousands at one time. One piece of the evidence for this is a deep buffalo jump site where the bones of many animals can still be found.

Another important re-introduction has been the smallest of all the canid species in Canada, the swift fox, no larger than many a house cat, that was extirpated in Canada and only reintroduced after many years of tireless work that was started by Miles and Beryl Smeeton of Cochrane, Alberta.

The latest arrivals, or re-arrivals, are a group of thirty-four black-footed ferrets.

Several news services have picked up on this story and sent out releases such as WWF Helps Masked Bandit Return to Prairies and
Calgary Zoo helps return black-footed ferrets to Canada after 75 years!

These attractive black-masked relatives of the weasel, the otter and the mink were extirpated in Canada many years ago, having last been seen in Saskatchewan in 1937. No one knows for sure how this population died out, but in other areas the numbers of their main prey, the black-tailed prairie dog (a relative of the ubiquitous gopher, or Richardson’s ground squirrel) crashed mainly because of farming practices. On top of that disease, especially the plague (yes, the same bacterium that caused the black death) probably took a heavy toll.

By the late 1970s it was thought that the ferret had become extinct, but in 1981 wildlife officials in Wyoming found a small group. Captive breeding programs were started in a number of zoos, including Toronto and Calgary in Canada. Many partners cooperated in the captive breeding program and you can find a black-footed ferret microsite at Calgary Zoo’s web site. It contains educational vignettes and will be updated regularly.

Despite some early bumps, which included the near loss of many animals from canine distemper (that I wrote about in my last blog of October 2nd) the program has been a success, and there are now 17 sites in the USA where reintroductions have taken place, as well as one in Mexico and now near the small town of Val Marie, where the Grasslands NP headquarters is located. There are plans to bring more ferrets in future years, as this release is just a start, and the numbers are not sufficient to ensure long-term success. No one has asked the prairie dogs what they think about all this, but for thousands of years the ferrets were part of their every day lives, and even made their homes in the burrows of their prey.

If you want to see black-footed ferrets head to the park. You might find them near prairie dog colonies and you will likely see other wildlife that is not found in many other spots of Canada, let alone Saskatchewan. Even if you don’t the sunsets over the hills are well worth the visit.
Posted by Jerry Haigh at 9:51 AM No comments: 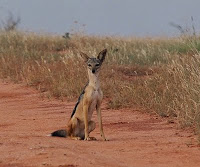 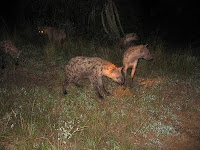 So, will distemper jump to humans? Maybe it has done so already, aeons ago, in the form of measles. We may be lucky, because the distemper and measles viruses are closely related. So much so that for many years measles vaccine was used to protect puppies. Another point. When measles vaccines programs fail, or folks take decision not to vaccinate children, the consequences can be terrible. Measles was once a major factor in many areas of the world where European invaders arrived and brought the disease to fully susceptible people.
Posted by Jerry Haigh at 8:14 AM No comments: