Amidst all the carnage and horror of Mumbai it hardly seems worth running a blog piece about wildlife, but this item, which I cut from the Singapore newspaper The Straits Times of November 8th, shows an ugly side to the entire gamut of wildlife issues round the globe. 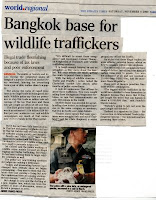 As you can easily see I had to get out the scissors and do some chopping in order to get the whole thing on to the scanner. It is one more example of how humans use and abuse wildlife. In this case the market is in Thailand's Bangkok, which is of course under a barrage of political strife right now, so this matter will receive scant attention from authorities dealing with more immediate issues.
Posted by Jerry Haigh at 8:27 PM 1 comment:

We have just returned from a wonderful holiday in Bali, Indonesia. Even there the issues of conservation surfaced with regularity, but the information is a bit confusing. The poster child for this island is the Bali starling Leucopsar rothschildi. We used two guide books, the ultra-famous Lonely Planets, and another called Eyewitness Travel, which has many more pictures of places and people than its more famous cousin, but not as much information. Then I checked the Internet after Googling the bird’s name – this is where I got the accompanying photo, 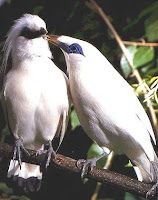 posted on the Bali Bird park web site here . It is in this park that the birds a bred in a conservation program that may be one of the most important on the island.

Both books agree that the numbers of truly wild starlings, also known as Rothschild’s mynah are desperately low, perhaps as few a ten animals, or maybe none at all, all confined (if there) to the Taman Nasional Bali Barat park in the island’s western region. Lonely Planets spells it out after telling the reader about release attempts from the pre-release centre in the national park. “

This proved impossible. Despite heroic efforts by some staff members, birds were often killed by predatory falcons, while countless other were stolen from the centre by armed thieves.

” The “armed thieves” bit is what caught my eye. The reasons for the theft is not hard to seek. Birds, according to Lonely Plants, can fetch USD $700 each.
Posted by Jerry Haigh at 7:00 PM 1 comment: 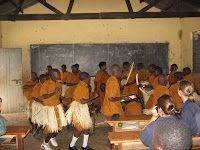 The big news on this fund-raising is that we are able to go through the Canadian branch of Veterinarians Without Borders/ Vétérinaires Sans Frontiéres. This means that donors who need them will be able to get charitable receipts.
Posted by Jerry Haigh at 8:24 AM No comments: