There’s a horrible story from Scotland about a drummer who died of anthrax in 2006. The inquest determined that he got the disease after inhaling spores. It seems as if he was exposed at a drumming class in at Smailholm village hall near Kelso in the Scottish borders.

The report reached me through the important source of Promed-ahead the very detailed Listserv that covers the entire gamut of infectious diseases of all living things, from plants to humans. You can visit ProMED-mail's web site here to learn more about this superb service, which is available to anyone and everyone, and is only supported through private funds, with no government involvement. This ensures that it remains truly independent.

Anthrax seems to be reported at least once a month, sometimes once a week, from somewhere in the world and it was a serious problem three years ago in Queen Elizabeth National park, Uganda, when a large number of hippo died. The year before the outbreak it was common to see leopard on the channel track near Mweya Lodge,

but they all disappeared and the next year we saw none. It is a reasonable assumption that they fed on carcasses and died of this disease. 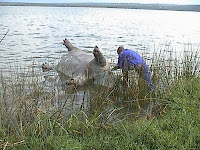 We saw this hippo in the park’s Lake Edward the year before the anthrax outbreak, and one of our MSc students, Dr. Eddie Kambale of the DRC went out to take a swab form an open wound on its neck. It was anthrax negative, and we saw other wounds. The likelihood is that it died in a fight.

There does not seem to be any information on the source of the drums and whether they originated in the UK, or came in from overseas. With the frequent reports of this nasty disease from so many corners of the world I just hope that the drums these kids are playing with at the Kasenyi Primary School in QEP were not from anthrax carcasses.

It would seem not, as the drums have been at the school for 4 years and are frequently played.