Fascinating report on the BBC website at this URL about guard dogs & cheetah conservation.

In brief, Anatolian Kangal guard dogs are being used to protect flocks of sheep & goats. 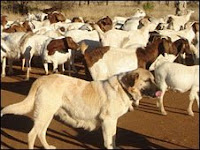 This picture is right on the site, but the photographer is not named. Pity.

The Anatolian Kangal is related to other livestock guardian dogs like the Great Pyrenees which shows the same guardian and bonding behaviour if raised with the stock from about the age of 8 weeks.

“We have had amazing results," Laurie Marker of the Cheetah Conservation Fund told the BBC. She added that Livestock loss has been reduced by over 80%. Obviously these results have a marked impact upon cheetah survival, as they are determined predators of small stock. They can kill many sheep in a single night, as I have documented in The Trouble With Lions.

In the ranch land south of Etosha National Park in Namibia (learn more here) they are considered a real pest by some livestock owners.

Laurie Marker, in a banner quote on the BBC site says


“If the farmers are losing livestock they will track every predator down. But if there are no livestock loss then harmony is developed."


The Cheetah Conservation Fund, which has representatives in several countries, also has a presence in Kenya where it is based in the Nakuru-Naivasha area.

I wonder if these dogs could be used to guard against other species – like lions. They might be useful as sentinels if kept with the flocks at night in bomas where they would raise a ruckus if a predator came close. Trouble is they would be very expensive to feed. They would also have to be thoroughly and regularly vaccinated. If ranging free they might just become lion dinner, especially if a pride goes on the hunt.
Posted by Jerry Haigh at 10:02 AM