For years there has been a usually friendly debate among taxonomists and biological scientists who fall into one of two camps. These are the “lumpers” and the “splitters”. I have always been a fence-sitter on this, as I do not know enough about the pure science to make a meaningful contribution. A recent report that reached me through the newsletter of the International Giraffe Working Group (IGWG) may lay the debate to rest, at least as far as giraffes are concerned. This beautiful image,

which appears here in the on-line journal BMC Biology is not a fanciful depiction of a multi-coloured palm leaf, but shows how six different groups of giraffes can be divided at the species level through the wonders of DNA technology. Many of the species separated as long as a million years ago. The ten-author study was led by David Brown, from the University of California, Los Angeles.

There are some obvious differences in appearance among the species, the most striking of which is the chocolate-coloured and clearly delineated coat pattern of the reticulated giraffe from Kenya’s north-east, which here in the first picture, taken at Borana. For those who wonder, the mountain at the back is Mt. Kenya. As for Borana, you can find out more about the idyllic lodge and setting here. 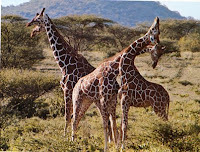 A closer view of these striking beasts show four of them in close association. Two are “necking” a competitive activity which ecologist Richard Estes describes in these terms (the) “Movement and counter movement appear rhythmical and synchronized, imparting the sinuous grace of a stylized dance”.

There are two other species of which I have my own photos. This one shows a group of Rothschild's giraffe, 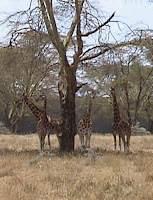 This photo of Rothschild giraffes taking the midday shade under a Fever Tree, was taken in Lake Nakuru NP, to which the founding herd had been translocated from western Kenya when the land they lived on had been developed for farming. Lake Nakuru is outside their traditional range, but the herd has been used as a source for subsequent translocations, notably back to Uganda, where numbers have been in decline ever since the ravages of Idi Amin and his armies.

And then there is the Masai giraffe, which is the first kind that I saw as I left Nairobi Airport (before it was named after Kenya's first president) in 1965, three days after graduating from veterinary school in Scotland and 16 years after leaving the country of my birth. I saw this group below the Ngong Hills, just outside Nairobi a few months later. Sadly there are not may there now, as poaching pressure with gun and snare has been relentless.

The speciation may not stop at six. Author David Brown and his colleagues in their paper in the BMC online journal state that

"The discovery of potential giraffe species may not be over. The Thornicroft's giraffes are a morphologically distinct population of giraffes endemic to the Luangwa Valley in Zambia, and a key link between the African continent’s north and south populations. The population is biologically isolated from other giraffe populations and as such is ecologically and potentially genetically unique."

In common with much else in the wildlife world, all over the globe, the numbers of giraffe are declining, in concert with expanding human populations. As Brown and his colleagues state

"There has been an estimated drop of 30% decade to less than 100,000 giraffes remaining on the continent."

Nowhere is this more apparent than in West Africa, where bushmeat hunting activity is rampant. Here is what Brown and his co-authors have on this part of the story.

.
There are several other fascinating articles in the IGWG newsletter that is edited by Dr. Julian Fennessy, so for those as captivated by these magnificent animals as am I, I suggest that you make contact with him. I cannot give you his email address here - that would be inappropriate, but he may choose to add it in the comments section to this posting.
Posted by Jerry Haigh at 5:07 AM