Have you heard of the North Pacific Garbage Patch? It is where circulating currents meet in that ocean. According to Australian Seabird Rescue spokesman Keith Williams it is also covered in a mass of garbage the size of Texas!
I found this reportabout a horror story that highlights the world’s plastic menace through the Wildlife Disease News Digest blog that I tap into regularly at 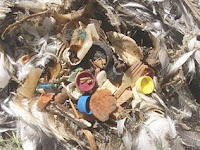 To summarize and quote

“an albatross chick has been found dead with 272 pieces of plastic in its gut. The haul included a cigarette lighter, nine bottle tops, 10 lids, a lollipop stick, twine, fishing line, a fork and a toy wheel.
It was found at Dunedin, New Zealand, but Australian wildlife carers said the 250g load was no surprise.”

This picture that I got from the report tells it all.

The report mentions New Zealand, but does not actually state that the bird was a Royal Albatross, which it almost certainly was. These amazing birds breed at Taiaroa Head on New Zealand’s Otago peninsula. The place is well worth a visit, one we have made a couple of times. You can find out more about it hereand see the images that I have lifted from their site. 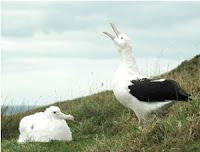 To quote from the web page about the colony

“The sight of a soaring albatross is unforgettable - held aloft on slim wings up to 3 metres (9'6") across, the great Albatross is capable of swooping speeds of more than 115kph. Viewing these majestic seabirds in their natural environment is not to be missed.”

As Taiaroa Head is the only place in the southern hemisphere where albatrosses – of any species – have a mainland breeding site it is also just about the best place to see them.

There’s an added benefit, at least for those who enjoy a moderate dose of hedonism. You cannot drive to the colony site without going past the 1908 Café, and that in itself is worth a visit.

Here is the picture from their web advert. Cream teas, delicious scones and real tea made properly. Yeah!
Posted by Jerry Haigh at 6:35 AM