As I composed my previous blog about guard dogs and cheetahs in Namibia, and their presence in Kenya, I wrote an email to the folks at the Kilimanjaro Lion Projectto see if they had any news on this front. Amy Howard has just replied, and the answer is yes.

In a nice blog (which you can find here) titled None-lethal Predator Control veterinarian Asuka Takita has written about the program in Kenya’s Masai Mara. 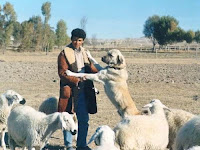 I have lifted two of her pictures, as they nicely show the relationship between the dog and the livestock, and make the important visual point that the dogs need to be bonded with the stock as pups.

One quote says most of what matters

Good luck to all involved, from Asuka to all at the Kilimanjaro project, to the herders, who have so much at stake. Have a look at Asuka's blog
Posted by Jerry Haigh at 9:08 AM