One of the very best blogs on which to keep abreast of developments in gorilla conservation is the one run by the park staff in the DRC’s Virunga National Park. This blog is regularly picked up by the BBC and features on their main web site

While this blog is specific to gorillas and particularly gorillas in the DRC, a more general blog is that at Wildlife Direct which collates news from around the world. Today’s Wildlife Direct post covers good news about wild dogs in Zimbabwe, news about snares and the capture of poachers, and a post from the Lion Guardian program in Kenya’s Masailand. The post on gorillas issues goes wider after the arrest of the rebel leader Laurent Nkunda, which, it is hoped, will bring the killing to an end. 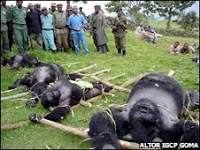 Not just the killing of gorillas as reported in last year, and which showed this ugly picture credited to Altor IGCP Goma, but the death of a ranger after an attack by Mai Mai geurillas

The snare issue is unlikely to go away any time soon. I have written about it in The Trouble With Lions, and like any visitor who delves a bit into Africa’s wildlife scene we have seen snares ‘up close and personal’. There is a blog that covers snares in the Masai Mara and has not yet appeared on the Wildlife Direct site. Thelatest post is headed Entries in Poachers & Snares (34). I’m not sure if this means that there have been 34 snare reports, but it is of course under the more general Mara heading.

The whole snare thing needs highlighting. I’ll have a go at that in a day or two, but right now we are getting ready to head out for the airport en route to Nairobi.
Posted by Jerry Haigh at 11:47 PM