Been researching a new book on a topic that fascinates me. Know today as Rinderpest, it was the scourge of cattle owners for centuries. Former names included The Steppe Murrain, The Asian Murrain, Cattle Plague, and Cattle Typhus. If susceptible cattle became infected by this highly contagious disease then almost 100% of them would die. It swept across Asia in wave after wave of pandemics, wiping out millions of cattle every time. It got into Africa when traders brought cattle across through the Horn of Africa and then swept down and across the continent over a few years, leaving utter devastation in its wake, killing not only cattle but a host of other cloven-hoofed animals like buffalo and many antelopes.

My working title is The Virus and the Vaccine: How Cattle Plague Changed World History.

I could not have come to a better place for my research of the history of the disease in UK because the entire collection of James Beart Simonds writings, and all the material he collected.

This portrait is the frontispiece of his very brief and modest autobiography. The staff at the College library have been brilliant, and I have had access to then entire collection of material that Simonds gathered during his very distinguished career. He led the charge on Rinderpest control in the mid-1800s, speaking to veterinary, agricultural and government groups all over Britain. 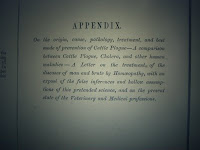 I was allowed to scan all of this collection – which ran to over 90 volumes of material – and it will take a long time to digest. Here is just one example of the many of the sort of thing I found. As the saying goes “watch this space”
Posted by Jerry Haigh at 3:52 AM