Writing this from the cottage in Gilgil, Kenya where six years ago I started working in earnest on the first draft of the manuscript that would become The Trouble With Lions. I already knew, at that time, that this would be the title of the book, that the lion would simply be the symbol of what is happening to Africa’s wildlife, and that I would have stories about many of the areas of the continent where I had worked with wild animals.

What I had not known was that our hosts, Nigel & Muffet Trent had an active and effective bird feeding and watering station right outside the verandah of their house, and that I would only have to walk a bout 20 metres to sit there and be able to photograph the birds that came to feed or drink.

These included cordon blues (this one is a male, identified by the red spot on his cheek), 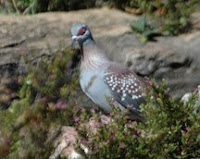 speckled pigeons and any number of bulbuls.

Yesterday we visited a new lodge that is sited right above Lake Elementaita, with a great view down over the water and across to the land that is now Soysambu Conservancy. The folks who own the lodge also offer balloon rides over the area. On the far side of the lake, and not visible trough the haze or at this distance, is the only known breeding colony of the Great White Pelican in East Africa.

There are two remarkable features of this colony. First, the young birds are pitch back in colour, and second the adults have move off to a neighbouring lake, either Naivasha or Nakuru, to find food. Being pelicans, they do this most efficiently when the heat of the day has started up a series of thermals, so one can see the birds circling in flocks as they gain height.
Posted by Jerry Haigh at 10:04 PM