Students away safely on Friday evening and due for some R&R in Amsterdam. Hope we did not work them too hard. I don’t think so & I received a moving and kindly though-of book of paragraphs written by each one of them saying how the experience had affected them. Not for sharing here, but something for me & Jo to treasure.

As they were landing in Holland Jo, Geraldine (her sister) and I headed out on a week’s R&R of our own. Our vehicle was a Land Cruiser belonging to my colleague Dr. JB Nizeyi and driven by professional driver/guide Dauda, which took all the pressure off us, me especially, as I have no driving to do for a whole week.

Our first stop was Murchison Falls NP, and this where we spent 2 nights, saw many species that we had not seen on other parks, had a great ride on the Nile in the tour boat, and enjoyed the rest.

Highlights included close-encounters with pair of Abyssinian Ground Hornbills, shown here, with the male having both red & blue bare skin over cere and neck, the female only blue. These turkey-sized birds are almost never seen flying, but stalk purposefully through the grass looking for food over large home ranges. 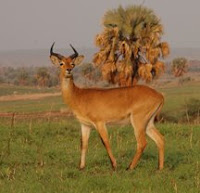 We also saw lots of Uganda kob, Rothschild’s giraffe, buffalo, warthogs and hundred’s if not thousands of Abdim’s storks, which were scattered everywhere, also foraging when not circling on the thermals. I almost forgot to mention two other mammals, one common, one less so. Oribi, a dainty antelope with a distinctive black spot behind the eye, are the common ones. Leopard the others.

Our most unusual sighting was of a very close association between these two when the cat crossed the track in front of us carrying a partly devoured example of the antelope.

As we circled on one of the many tracks we came across this old bull elephant having a good scratch against the trunk of a Bourassas palm. It must have felt good!
Posted by Jerry Haigh at 4:10 AM