Back in February I described the official opening of the new solar unit that we had donated to the little primary school at Kasenyi in Queen Elizabeth National Park, Uganda. Like a daft idiot I got so tied up in the show & the reaction of the children that I failed to take pictures of the event, other that the ribbon cutting by Dr. Jo Haigh & Dr. Margaret Driciru, who is in charge of research and monitoring in the park,. and was acting chief warden that day.
Here are some shots that i missed that day (taken by Jo).

First, the gifts that we gave the children, an exercise book, pencil and teddy bear or other toy for the older children, then the speeches by various officials, 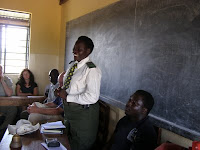 first Margaret and then 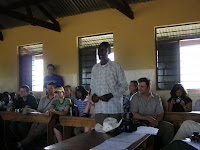 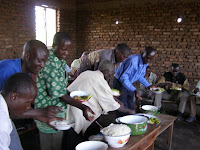 the Community Conservation warden, then drinks and lunch for everyone who could be fitted into the classroom, and finally, the actual TV working. 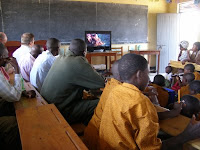 All the staff, including Kiiza George, the headmaster, were delighted with the show, and if you take a close look at the last picture you will see that Jo pressed the shutter at exactly the right moment to show the head of a hippo. I had chosen to show a DVD about fisheries conservation and the importance of not killing hippos as they are the keystone species in the lakes of Africa's heartland. Wilson and Margaret are keen to get copies of the video, as it is a great example of the sort of thing that gives a powerful message for all.
Posted by Jerry Haigh at 11:09 AM