Amidst al the doom and gloom about wildlife and the dwindling numbers of so many species, form fogs the world over, to rhino, lions and South American primates, it is nice to find a story that has a more positive message.

According to the Thai Society for the Conservation of Wild Animals the Sarus crane in Thailand had been extinct for at least twenty years. The government Office of Natural Resources and Environmental Policy and Planning (ONEP) goes further and states that it disappeared from its natural habitat in Thailand 50 years ago.

Efforts by conservation groups, including the Eastern Sarus Crane Reintroduction Project, under the Zoological Park Organization(ZPO), with the Royal Patronage of H. M. the King of Thailand have made the all-important start to reversing the situation.

The ZPO has successfully bred sarus cranes through artificial insemination and ten chicks have been prodcued. A story in the Bangkok English newspaper of 2nd August quotes ZPO director Pimook Simaroj as saying that the chicks have been released into the wild and in a related story The Sarus Crane Reintroduction Project Thailand have posted a Youtube video that shows a radio collar device being fitted to one of the birds before release. The ZPO and the Thai Department of Natural Parks, Wildlife, and Plant Conservation (DNP) plan to release more cranes.

If the survival rate is satisfactory, the DNP will discuss with related authorities to withdraw sarus crane out of the extinction, but as Nisakorn Kositratna, ONEP's secretary-general said “it may take more time before the cranes can be taken off the extinction list.” That's because the freed cranes were bred in captivity and a species can be removed from the list only after it successfully breeds in nature and its wild population grows.


In neighbouring Cambodia a new Sarus Crane reserve was created on 6 Jan this year, although it did take 5 years for the consultative and bureaucratic process to be completed. According to a report on the website

The sarus crane, in all its grey glory and red head, is indeed majestic. 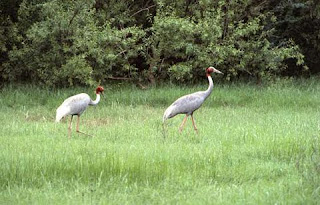 I got this picture of a pair when I traveled in India a twenty-five years ago. It is the tallest of the cranes at about 150 cm and was originally given the romantic name of Antigone antigone by Karl Linnaeus, the father of modern taxonomy.

Quite why he chose the double barrel is a bit of a mystery, but I speculate that it was because the bird was believed to be truly monogamous. Not just monogamous, but also according to myth, so faithful that if one partner died the other would pine way and die. If I am right this was a reference to Oedipus’s daughter and heroine of Sophocles’s play who was unable to control her emotions on the death of her brother Polyneices and Linnaeus is bound to have had a classical education.

The name was later changed to Grus antigone to more neatly, but very prosaically, fit it into the crane family in general, a group that includes the very common Sandhill crane, the Whooping crane that nests in northern Canada and is even more endangered than the sarus, and several others.

These birds once ranged across southeast Asia, as far west as parts of India and Sri Lanka and even into northern Australia and are generally divided into subspecies according to the area in which they live.

Let’s keep our fingers crossed for this beautiful bird and the efforts of the dedicated people who are trying to keep it, and its habitat, in a viable state.

What an interesting post. It is fantastic to hear good news for a change. I did not know that AI could be done with birds so I am doubly interested. Diane

Artifical insemination of birds has been around a long time. The modern farmed turkey cannot mate naturally because we have developed its shape (breast) so much that it can't make the jump (as it were). Thirty years ago when peregrine falcons were in trouble AI was used in them. My colleague at the time, Dr. Lyn Oliphant had a specailly adapted WWI pilot's leather hat with a small catching gutter around it to catch the tiny ejaculate. The male bird was trained to mount on his head and produce the "goods." Lyn called the helmet a fornicap.

Hi Jerry,
Thanks for such nice article on sarus crane conservation in Thailand. However, it's not DNP Thailand to establish this project and continue to dedicate countless effort. Zoological Park Organization of Thailand (ZPO) is the authority establish the major captive sarus crane population in Thailand and conduct this reintroduction project. I believe this project won't be successful without cooperation from different agencies. However, your article did not give any credit to Zoological Park Organization (ZPO), which is not fair to those who really work hard to bring this species back to the wild in Thailand. I wish you may correct your article so that true heros can be honored.

Thanks Michael,
Sorry I got the credits wrong. I read a great deal about cranes and thought I had it right.

I even had a sarus crane as a patient in the 1970s in Kenya. It had a broken wing and with my colleague Peter Holt, a small animal surgeon, we repaired it. I ran the anesthesia and the whole thing was carried out in the Sauna room of the Mount Kenya Safari Club. The manager put the place off limits to the high-priced guests for the day. I can recall seeing people like Michael Caine, Babara Streisland and David Niven there as guests every now and again.

If I coud post a picture of the crane with the repaired wing on this spot I woud do so, but it does appear in my book "The Trouble With Lions"