Of Moose and Men and Tony Bubenik

I thought I would share with you a little of the material from my new book Of Moose and Men. The subtitle is not yet firm, but may well end up as something like The Moose, The Whole Moose, and Nearly Nothing But the Moose.

One character whom I met several times through the years, and who was highly regarded among deer biologists around the world was Tony Bubenik. I fist met him in Prince Alberta in 1978, and then several subsequent times, including when he stayed in our home.

He was never backward in coming forward with new ideas or extending discussions. Not all his ideas proved to be correct, but he was the first to acknowledge it when they did not pan out, and to the end of his life at age eighty-two he kept abreast of developments and technology.

His output included something over three hundred articles and contributions in numerous books. He was also fluent in six or seven languages (accounts differ, probably because of differing definitions of fluency) and wrote in thirteen. 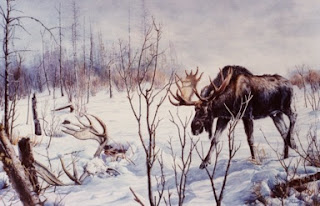 To top it all off, Tony was an accomplished artist, and we have two large watercolour crayon works of his. This one shows a scene which he witnessed when walking in the bush. He told me that the look of surprise on the animal's face was exactly what he saw. The sketches that illustrate the story I have below were also his, made from Super8 movie clips shot by his biologist wife Mary.

Tony’s early life was not easy. He first suffered persecution from the Nazis in his native Czechoslovakia (as it was then) and then dealt with the Communist takeover after World War II, when he was forced to work as a labourer. He came to Canada in 1970 and was soon recognized as one of the most innovative thinkers in the field of deer biology.

Because he was fascinated by the role of antlers in deer society Tony carried out a series of experiments related to the pre-flight displays that occur just before and during the rutting season. He loaned me a copy of Mary’s footage and his son George kindly allowed me to use the sketches for the book.

For the moose study he built a dummy head to which he could attach antlers of various sizes. Even with only two legs, as the sketches showed from these and other experiments, the wild animals reacted to them. He found a bull that had taken up residence near a pond in Ontario and proceeded with his study. 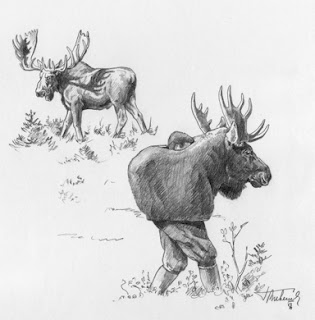 First, he put on a tiny set of antlers that matched those of a sixteen-month-old spiker and walked out from behind his hiding place when the wild bull appeared. The movie shows the bull lifting his head briefly from the water, taking one glance at the intruder, who was showing the correct behaviour in moving lateral to and not facing the dominant animal, and ignoring him. This was much as expected.

Next, as his experiment escalated, Tony exchanged the spikes for a set of super antlers, far bigger than those of the resident. This time, when the bull saw him, he again took a look, but he did not hang around. He simply retired from the scene and ghosted into the spruce trees.

Then Tony showed his true scientific inquisitiveness. He put on the last set of antlers, a set that he had constructed to match those of his subject as nearly as possible. 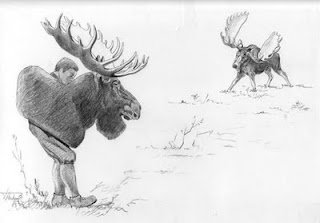 This time he was neither ignored nor avoided.

As Tony’s drawing from the film clip shows, the bull came round the side of the pond and began the ritualized threat that precedes a serious fight among bull moose of equal rank. He dropped his head so that the massive palms would show to maximum effect and rocked his head from side to side, showing off his “stuff.” He walked forward with his forelegs spread wide and locked as if they were stilts, like Frankenstein figures in early horror films.

Not surprisingly Mary’s filming technique suffered a bit at this point as she began to retreat behind a tree. Tony dropped the dummy head, having no wish to take his proof to its inevitable conclusion.

The dummies were so convincing that, as Tony wrote:

“On two occasions moose cows offered themselves for copulation even though a short while earlier they were courted by a bull of lower rank antlers.”

Wow this is a really interesting post. Amazing what can be achieved with a bit of thought. Love the moose in the snow and the sketches as well. Great stuff. Diane