Getting over the highs and lows of my ten days at the Sage Hill Writing Experience, which took place at St. Michaels Retreat in Lumsden, in Saskatchewan’s beautiful Qu’apelle Valley.

1. Meeting an amazing array of writers, about fifty of them, from all across Canada. Nine were faculty, working in poetry, fiction and non-fiction. You can see their mug shots and bits about them on the Sage Hill website.

2. Watching Philip Adams conduct, compére, entertain and organize everyone. While not as tough as herding cats, his job required him to sleep little, laugh a lot, drive to and from the aiport at crazy hours and keep us all on track.

3. Listening to everyone read from their work. On three evenings about a dozen of the “students” had five minutes to read something. Each was introduced by the person who read before them. On three other evenings faculty had the chance to read for a longer period, up to half an hour.

4. Camaraderie and friendly chats over a glass or two of whatever takes your fancy.

5. Good food, amazingly good for institutional grub. Hats off to the team in the kitchen.

1. First up, the fact that I found out that my camera had been stolen on the way to the retreat. It almost certainly happened at a Subway stop in the town of Davidson. Not only my little point-and-shoot digital, but the specialized and expensive 400 mm lens that I use for bird photography. I have quite a number, 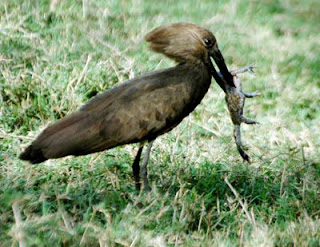 like this one of a hammerkop who looks as if his eyes were bigger than his stomach at this spot on my website. 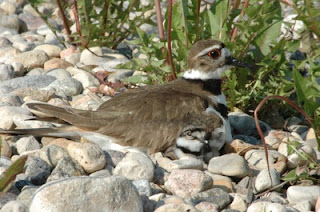 The one below, of a kildeer in our driveway with her newly hatched chick, is the last one I took with the big lens. With neither piece of equipment to use I cannot give any new photos here.

2. My bum knee – I won’t bore you, except to say “think twice (or many more times) before you go for a full knee replacement.”

There was a joint class for “beginners’, but from the quality and tone of their readings they were far from neophytes. There was a poetry colloquium. There were sessions on creative writing and on mystery.

I was in the smallest group, who were all working on non-fiction stories. 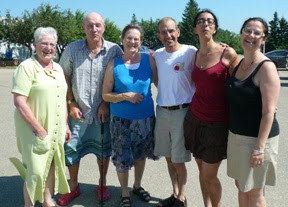 Here we are. From left to right, Jean Crozier, Me, Myrna Guymer, Ted Barris, Ayelet Tsabari and Evonne Garnet.
We were led by award-winning military historian Ted Barris.

Ted has not only won awards for his books, but he had to leave early in order to attend a ceremony for veterans. As he said himself, “I am not a veteran,” but his work has highlighted many veterans issues and he has told their stories from both world wars, Korea and other conflicts. His commendation read, in part:

"Ted Barris has made such exemplary contributions by generously giving of himself and so both benefiting veterans and making manifest the principle that Canada’s obligation to all who have served in the cause of Peace and Freedom, must not be forgotten.”

Jean Crozier, Evonne Garnett and Ayelet Tsabari were my class-mates. One other person, Myrna Guymer, started with us but had to leave at very short notice on the second day when she received news that a tornado had ripped through her home town and knocked everything, including her own home, sideways. With her husband unwell and awaiting surgery she felt she had no choice but to head home.

Jean is working on the tricky subject of widowhood, her own and the same for others. Her initial idea had been to document her life with her late husband, whose photography she so admires, but Ted persuaded her that the subject may have a much wider scope.

Evonne has, as Ted put it in his blog written on the 26th, “the greatest and worst story to tell.” "She is struggling with her mother’s story of growing up in a household where rape, paedophilia and abuse were the norm." Her mother kept a meticulous journal of everything she suffered and Evonne’s challenge will be to find a way to use it. Ted quotes Evonne when she writes “with only the aid of her (her mother’s) journals and her faith, she broke free of the abuse cycle to find a measure of peace and freedom.”

Ayelet is working on what she delightfully calls “a suite of essays” that Ted stated “explores her own travels as a woman apparently unable to settle in one place”. Ayelet read from her darkly comical story about her time in the Israeli militry and being subjected to a lie detector test on suspicion of gun theft.

Ted has also steered me in a new direction and urged my to write about bears, and drop the “porcupine” segment of my planned book. He reckons there is enough about bears, particularly polar bears, to make an important book. I’m still wrestling with that as I last worked in the Arctic in the mid-1980s, but with lots of research and interviews I might be able to tackle it. I suppose that I did this with Of Moose and Men, with interviews and emails to over 80 people world-wide.
Posted by Jerry Haigh at 7:04 AM

So sorry about the cameras, what a pain, hope they were insured! I have a friend who has just had a full knee replacement one side and a 1/2 replacement on the other! It has sure put me off ever having it done when I see her trying to get around :-(((
Take care Diane