There have been several reports in the scientific literature and on websites (I first saw one by Rebecca Morelle on the BBC site) about the dire situation facing one of the world’s most endangered cats. This is the Iberian lynx, that lives in Spain and has been under intense pressure from farmers and the general impact of humans for a long time. This beautiful cat is about the size of a cocker spaniel and has the ear tufts of the caracal or African lynx. 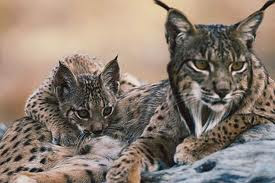 I found this picture (one of many) on this site through Google.

My only picture of a similar sized cat is of Africa’s serval, which has longer legs, but the same sort of body size. This one was taken in Kenya’s Meru National Park in the early 1970s. 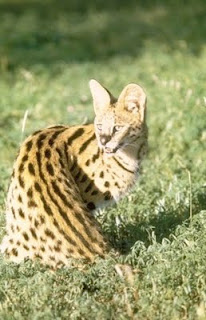 There are thought to be only about 250 Iberian lynx left in the wild and there are those who have suggested that this puts them at risk because of low genetic diversity and inbreeding. The story is typical of the roller coaster for many species of wildlife. In the 1960s there were an estimated 3000 of the cats, but by 2005 the numbers were down to about 150. One major factor in the decline has been the reduction of the main food source, the rabbit. A successful and active captive breeding program has brought them back up to today’s numbers, but they are now only found in two isolated pockets in the south of Spain.

However, a recent report on the BBC website cites the authors of a scientific article by Dr. Love Dalen and others in the journal Molecular Ecology which suggests that the cat’s survival may not be doomed by its tiny population size.

The research suggests that the lynx has had little genetic variability over the last 50,000 years, and this has not hampered its long-term survival. The authors go further and imply that the information should offer hope to conservationists who are trying to reverse what seems to be a path to extinction.

Dr. Dalen, from the Swedish Museum of Natural History, is quoted as saying that "This indicates that some species can do fairly well at low population sizes, even for a very long period of time."

While most geneticists argue that there is a vital place for the use of genetic profiling in the conservation management of wild species there are examples of very successful recovery of almost terminal situations when genetic diversity has been severely limited.

As I wrote in my book The Trouble With Lions:

“The white rhino qualifies as one the really impressive examples of conservation in action. The southern race, which once occupied an area in parts of what are now South Africa, Zimbabwe, Zambia, Angola and Botswana, had all but died out by the year 1900.

A 1904 estimate had only 10 animals left in the country, all of them in the Umfulozi area of Zululand. Mainly through the efforts of one man, B. Vaughan-Kirby, who was the first game conservator in that part of the country, the species was brought back from the brink. In 1916 he reported 20 animals alive.

From that nadir the numbers climbed slowly to something short of five hundred when in 1952 Ian Player, oldest brother of champion golfer Gary, got involved in the very earliest translocation efforts and movement of the animals to many parts of Africa, and indeed to zoos overseas.

Between 1961 and 1972 white rhino had been moved to an impressive 38 new locations in South Africa and eight other African countries, including Kenya, where they went to Meru National Park and became my patients when I lived in the area for ten years. Over and above these destinations rhino also moved to 17 different countries, including Canada, the UK, and the USA.” 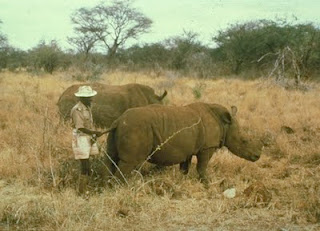 This pair of white rhino came to Meru in the late 1960s fror what was euphemitically called "Lesotho" (this was the days of apartheid and no credit could be given to South Africa in Kenya).

Let’s hope that with a population of 250 and a long history of limited genetic diversity, that the Iberian lynx can make a comeback like the southern white rhino has done.