In the past week I have learned a whole lot more about moose calls. I had known that during the rut bulls make a noise that has been variously described as a grunt, a hiccup and even, somewhat bizarrely, as sounding like “a human being in the throes of seasickness.” This last description was made by Frederick Selous, the famous hunter of African big game who came to Canada in the early 1900s.
I wonder if this bull, painted by the late Tony Bubenik, was grunting. 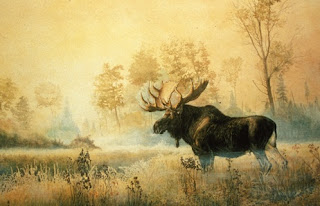 I also knew that cow moose make a moaning call during the rut and had believed it to be a protest to courting bulls, especially youngsters.

Then a BBC Nature story written by Ella Davies appeared about a second reason for the moan. Davies had interviewed Dr Terry Bowyer, who used to work in Alaska before moving to Idaho State University. What Bowyer showed, after many hours of observation, was that the moan has a second surprising purpose. His paper was recently published on line in the journal Behavioural Ecology and Sociobiology. He and his team showed that the moan is used as a tool to attract bigger bulls if a small male approaches. When that happens females moan more and this triggers aggression in larger males.
In fact, As Terry said in the interview

“Male aggression was more common when females gave protest moans than when they did not, indicating that this vocalization incited male-male aggression. Protest moans allow females to exert some female choice in a mating system where males restrict choice of mates through male-male combat.”


In this regard it echoes shades of human behaviour and clearly shows that there is a considerable element of female choice during the rut. When I chatted to Dr. Bowyer he told me that one of his colleagues, who read the manuscript, said to him, “This is not unique to moose, I have seen it in bars in Wisconsin.” I replied,” Not just Wisconsin, I saw it during my student days in Glasgow.” Of course we both acknowledged that this comparison is an oversimplification. As Terry said in that same BBC interview,

“Human females have far more opportunities for mate choice than do female moose because of differences in mating systems.”


The grunt of the rutting bull and the moan of the cow are not the only sounds that moose make.

As we sat over a beer during our recent writer’s retreat at the Sage Hill Writing Experience naturalist and long-time moose watcher Roy Ness of Whitehorse told me of two encounters with moose during which he heard more than just the moans of a cow.
In mid-September 1983, at the height of the rut, “I was in what's locally called the Teslin Burn,” he said.

“I was camped at the end of Grayling Lake, south of Teslin Lake, an area of regrowth that had the highest moose density in the Yukon.”
As he sat on a three-metre tall knoll at the end of the lake in the gathering autumn dusk he listened as a cow accompanied by her calf came to the shore from quite a distance away."


As I read Roy’s subsequent emailed graphic description of the next ninety minutes I got goose bumps.

“I was sitting there as it got dark and I heard the cow call. It started high and went down the register for about 10 seconds, closely repeated several times, each shorter than the last, until it ended in a couple of short grunts. She would call every five or ten minutes, each time getting closer and each time getting answering grunts from a bull at the far end of the lake.”


There was no moon that night and by the time the animals arrived in the meadow just below the knoll only the stars gave any light. It must have been magic.
“Even though they were only a few meters away,” he wrote, “I could barely discern their shapes. She continued to call for about an hour while her calf seemed to be playing—fits of running about then standing still for a while.”

I called him and as we chatted about his experience he told me that the cow suddenly became aware of him, although there was no wind to speak of. At that point “she let out the loudest sound I've ever heard escape the lungs of any animal. It was a lion’s roar with a deep loud belch mixed in. I nearly jumped out of my clothes.”
The cow took off at a great rate, down the meadow and through the willows, crashing though the bushes and letting out the same call as she went. 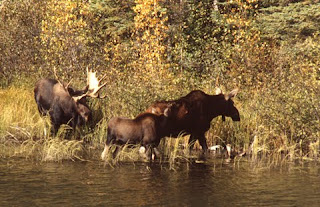 I wonder if the cow and bull ever got together, as happened in this picture taken in Prince Alberta National Park by Gerhard Stuewe.

This alarm call is made by both sexes.

On another occasion, in early June Roy watched a cow and her small calf feeding in some willows. “I could not see them a lot of the time,” he said during our conversation, “and they certainly could not see each other all the time. However, they both let out a series of high-pitched calls, almost like squeaks, as they stayed in touch. I couldn’t tell which was the calf, and which the mother.”

Vince Crichton from Manitoba is Canada’s senior moose biologist and has witnessed and videotaped a play fight encounter between two young bulls during which they both made sounds that closely resembled the moan of the cow during the rut. He told me “ If I had not seen them and heard their moaning I would have said it was cows – quite amazing – have video of this and I was about 20 feet from them.”

I wonder if they actually communicate as such, or is it just a series of noises. Has anyone tried to learn Moose LOL. Interesting post. Diane

I suspect that there is indeed some level of communication or language. Hunters have long know how to call moose using birch-bark horns or even, these days, coffee tins with a bootlace threaded though the base and once wetted, pulled in what has been described to me as "pull-slip."
If one does it wrong, the moose wil run away,rather than coming close