Those who subscribe The Wildlife Disease News Digest Listserv (wdin@usgs.gov) will be aware of the very unusual occurrence of rabies that has been diagnosed in an entire pride of lions in the Khutse Game Reserve in Botswana. This isolated park lies right in the middle of the country, and I had never even heard of it until the posting appeared in my “in” box. No worries. With the help of the ever-useful Google I found not only a fascinating description of this remote and very basic reserve, but a map (at this URL ) showing all the reserves and National Parks. 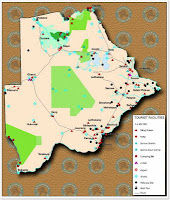 Khutse is not named, but I’m guessing that it is the large green area in the middle of the map.

Dr Clay Wilson, a private veterinarian, diagnosed the disease and commented, in the article you can find under today’s date posted here

“that the lions could have acquired the disease from jackals”

. The full article is available here This is probably the most common way in which this deadly disease is transmitted in Africa, so he is probably correct. 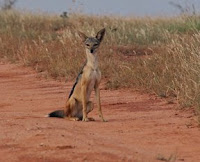 As the jackal strain of the rabies virus can be identified with DNA techniques it will be interesting to follow this case.

A footnote to the article has wider implications and highlights yet again the dangers of plastic waste, the plague of so much of our world in every corner.

A senior Wildlife Biologist, Mr Keagapetse Mosugelo said the elephants died as a result of plastics they ate in the landfill.

"The situation at the landfill is not good for animals,"

he said, adding that the electric fence that has been installed is not sufficient as birds will still flying in to eat waste.

Chobe, which is a fascinating park that lies right in the north of Botswana, is one of the areas on the continent where elephants have created their own min-deserts as they are so abundant that have almost eaten themselves out of house and home.

When we visited Chobe ten years ago there were tracts of nothing but sand and elephants had to trek many miles every day between food sources and the Chobe river (which flows into the Zambezi) where I took this picture.

For readers of mystery novels, I would recommend Anthony Bidulka’s Sundowner Ubuntu: A Russell Quant Mystery which is set in Africa, and in which Chobe plays a vital role. Tony, whose web site is here visited Botswana as part of his “research” for the novel (tough research eh!) and was obviously hard bitten, but luckily not by a jackal.
Posted by Jerry Haigh at 3:47 AM

Jerry, it was my intention to review your book and place my comments on Amazon where your book is for sale. However, because I have not purchased anything from Amazon, I wasn't allowed to comment! Bugger. . . . . .

So, I offer my review here, on your blog. Interestingly, at least to me, your blog entry for today refers to the same plastic pollutants that I find so abhorrent from the descriptions in your book!

So, for what it's worth:

This book is an easy read and a highly entertaining account of the travels and work of a wildlife veterinarian in Africa. As we have come to expect of autobiographical veterinary anthologies, it is full of engaging tales about successful animal medical treatments and eccentric humans. There are even one or two accounts that expose the less attractive qualities of some rather well known figures in the world of African wildlife. But there is education as well as entertainment in these pages. Professor Haigh’s teaching activities in Uganda contain many lessons for the reader as well as for the veterinary students who are featured in the book. Most of Jerry’s anecdotes have a point and are related for a reason. In addition to the entertainment value offered I think the writer has, as do most writers, something to say. He says it in a matter-of-fact manner without too much embellishment for effect. He doesn’t have to. The accounts of his first hand examples and experiences with the destruction of wildlife and the environment are chilling and disturbing to read. Yes, there is a dark side to the book. The Trouble with Lions is not about just lions, but rather uses lions as a recurrent example of the plight of all African wildlife. Interwoven with entertaining stories about the African adventures of life-partners Jerry and Jo Haigh are striking examples of the demise of both predator and prey species that were once abundant in Africa. They fall victim to self interest, greed, fear and political stupidity; themes which appear far too often when reading about this part of the world. Perhaps these things are also present in issues surrounding North American wildlife, but they are less obvious and we are a bit more sophisticated in our destructive ways. Jerry’s account of the trade in primates (monkeys) and the poaching of other wildlife for food is very damning and sticks in my mind alongside the vivid description of plastic bag pollution and its effects on the landscape and the animals in it. Reading this book will entertain you and sadly, educate you, about what the world has in store for its wildlife. Africa, the Dark Continent indeed.