It is a nice change to be able to report the good rather than the depressing about wildlife issues anywhere. Here is more good news from Kenya and the Lion Guardians of the Kilimanjaro region. Their annual report, written by Leela Hazzah, Antony Kasanga and Amy Howard is mostly upbeat and gives one hope. Much of what I am about to report is lifted, with copy and paste, direct from their report.

"Since the rains, the lion population has tripled on Mbirikani; we estimate that there are currently between 13‐16 lions on the ranch. Many of these lions are moving here from Amboseli National Park, and the group ranch surrounding it, and from the southern border of the ranch from neighboring Kuku Group Ranch"

Of course no one should imagine that the lions have decided on a cattle amnesty. 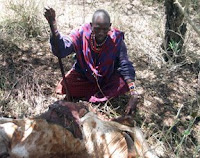 This photo, taken by Anthony Kasanga shows Lion Guardian Kapande with a cow killed by a lion on the ranch. It is simply that through the Predator Compensation Fund (PCF) herdsmen can be compensated for cattle that are proven to be lion victims. Since the launch of PCF there has been a dramatic decrease in lion killing, while lion killing has continued unabated outside the ranch boundaries.

For instance on neighbouring ranches, where no PCF, or even a guardians program, exists, there have been a minimum of seven lions killed in the past year. Leelah and her team-mates are in the process of starting up the Lion Guardians program in these areas, in the hope of reducing lion killing.

Program members spend at least three days a week monitoring predators, ranging from lions to some of the smallest of all, like the genet. Currently there are eight collared lions being monitored by the Guardians. 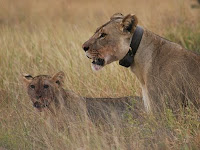 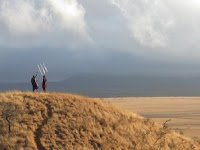 These photos, taken my Amy Howard, show some aspects of the program.

One collared male lion, Ndelie, has recently been fitted with an Iridium GPS collar. This enables us, and the general public, to monitor his activities via the internet

Another new development has been that the court system has begun to deal seriously with people who kill lions. There have been three arrests this year that led to substantial fines. A man who poisoned two lions was fined the equivalent of US$ 1000, and two murrans caught in possession of lions claws intended for sale on the coast were fined USD $1250. The claws would possible have fetched as much as US$ 3000, so, as always, some rich buyer(s) are just as guilty.

This is obviously a very brief synopsis of a detailed nine-page report. Anyone who wants more can either email me and I can send a pdf copy, or get in touch directly with the folks in Kenya through their web site.
Posted by Jerry Haigh at 12:14 PM

I recently received poem from an Aussie friend of mine. Tony Tubbenauer is 90-something years old. We met in the 70's when he and his now deceased wife were guide divers on Heron Island, Australia. A former WWII fighter pilot who claims to have flown "just about every kind of aircraft the Allies ever had"(and lived), Tony has met and dived with them all - the Cousteau family, the Taylors, the Cropps. As an underwater naturalist and diver, his frame of reference for environmental issues is, of course, the ocean. Here is his poem:

Children, come with me on this warm summer’s night,
Down to the sea, in the soft moonlight,
We’ll sit on the sand and quietly await,
The turtle’s coming; she may be late.
She’d traveled so long past reef and shark,
To find this beach and in the dark,
She struggled ashore with her gift of life,
To make her nest, despite all strife.
On this, her beach, where the moonlight glows,
Casuarinas sigh in the breeze that blows,
From the Coral Sea where it had it’s birth,
No sweeter wind blows on this Earth.
A hundred eggs she’ll lovingly lay,
Deep in the sand and until this day,
For fifty years she has roamed the sea,
What a mariner’s tale her life would be.
The things she’s seen in the ocean wide,
As she answered the call of the changing tide,
It’s been many years since she left this sand,
As a tiny thing you could hold in a hand.
She’s roamed the sea, the things she’s seen,
Would make for us a fantastic dream.
Mantas and whales, ferocious shark,
Corals and things that glow in the dark.
Creatures that we never have seen,
So many places we never have been.
Now she is here, after all those years,
And as she lays she sheds her tears,
If you ask the scientist man,
He’ll tell you she cries to remove the sand,
But if you are the caring kind,
Other things will come to mind.
In the long years since she left this shore,
And man has held a constant war,
With himself, the world and nature’s kind,
What is it he has in mind?
As carelessly he pollutes the Earth,
The air, the sea and for what it’s worth,
Spreads concrete jungles across the land,
Will he build upon this sand?
And so, as we see the turtle cry,
Her tears are running from each eye,
Surely she cries, not for the sand,
She grieves for the stupid greed of man.
She cries for a world that once had been,
Blue oceans and a land of green,
Trees and plants, bright flowers too,
Skies not grey but deepest blue.
People living in joy, not fears,
That’s what I see in the turtle’s tears.