Two truths about the Masai Mara


My first trip to the Serengeti / Mara region of East Africa was in 1966. I have been back a few times and of course enjoyed every minute of it while being sadly aware of what is happening there. My wife still dines out on the story of waking in the middle of the night to the sounds of something large and noisy just outside our tent. 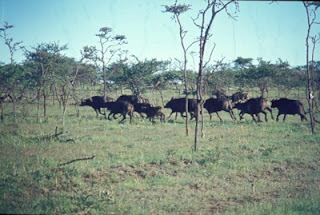 When I peeked out (there was no way she was going to) and told her we had been joined by a large herd of cape buffalo she was not impressed. She was even less impressed with having to navigate the dozens of fresh patties in the morning.

There has been an interesting contrast in two recent reports about the fabled Masai Mara region. There can surely be nobody reading this blog who has not heard of the Mara and especially the migration of the wildbeest. I’ll further bet that all readers have seen at least five nature program on TV about the area, the crocs on the Mara river, their ambush of wildebeest and zebra and so on and so on.

The article in the Toronto Globe and mail of June 8th written by Robin Esrock of the OLN/CITY-TV series World Travels is yet another in the long string that perpetuates the beauty and wonder of a trip to this fabled spot. His piece, which you can read here is titled Catch Africa’s Great Migration – in great luxury.

I imagine that Esrock had a wonderful time but one must note that as a travel writer he probably has a vested interest. He, like so many of the TV producers who make those magic films, has somehow avoided the flip side of the coin. Perhaps nobody told him it even exists. Perhaps this was his first trip to the Mara.

For a much more discouraging, but entirely accurate perspective it is worth looking at Matt Walker’s report of June 2nd that appeared on the BBC website.

This one it titled Wildlife Crash in the Mara region of Kenya, Africa. Walker cites recent work that appeared in the prestigious Journal of Zoology. The key message is that wildlife populations have crashed in the past three decades. He quotes Dr. Jospeh Ogutu who has led research into the situation and the most worrying statement is that

“The status of Masai Mara as a prime conservation area and premier tourist draw card in Kenya may soon be in jeopardy.”

Ogutu’s team concluded that the Mara has lost two-thirds of its wildlife since 1977. Even the wildebeest migration now only has 64% of the numbers that existed in the early 1980s. As if that is not bad enough, the non-migrating wildebeest numbers have dropped by 97%.

There are two main reasons and both are related to human activity and particularly the growth of the human population. The cattle density has increased three-fold while the density of sheep and goats, which are usually herded together, has increased seven-fold. Both of these domestic species compete for grazing with the wild animals and of course also displace them. 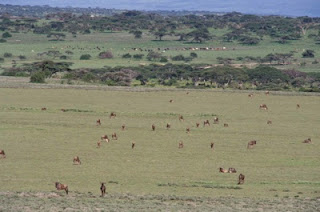 In this picture, taken twenty years ago, a herd of cattle in the background grazes near a Masai manyatta while wildebeest dot the foreground.

“over 1500 poachers have been arrested within the Mara conservancy between 2001 and 2010, with more than 17,300 snares collected by rangers in the same period.”

Walker reports that “the African buffalo are all but gone.” 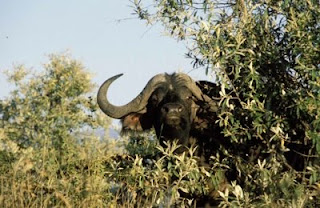 Despite these worrying numbers I will be back in November, when my granddaughters will join us and their parents on a Kenya trip.

We may be lucky and see topi bulls sparring like this 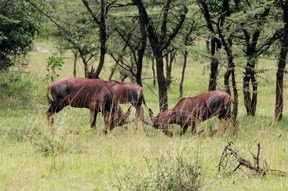 but the teeming herds of a hundred years ago, or the huge numbers I first saw 45 years ago will mean little to them.

We can at least be fairly sure that my wife and the next two generations will not have to worry about buffalo patties near the tent. Of course cow patties look pretty much the same.
Posted by Jerry Haigh at 4:35 PM

It is so very sad, human beings are sadly pushing the wild life out. The few that will do everything to save them are just not enough. Wild dog's are now very thin on the ground in South Africa. I will be very sad to see the latter disappear, but unless something is done very soon they certainly will. Tourism will drop as the wild life drops and the poorer countries will become even poorer!! Diane

What a sad state of affairs. It all feels a bit like a boulder rolling down an increasingly steeper hill. Thanks for sharing this story and your insights.

I found your blog while you were on hiatus, what amazing experiences you have had! And congratulations on your new book.

Thaks for your comments. The situation is pretty desperate and I'm going to pull together some pictures and text about snaring in Africa for a new post in a day or three.

WOW Pretty good picture thanks a lot for this awesome information. I like it so much. keep working and posting variety of articles.