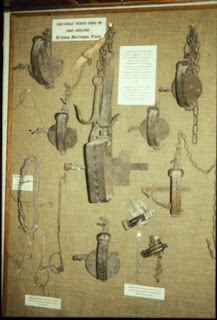 In my post of June 10 I wrote about the real situation in Kenya’s Masai Mara and the decline in wildlife numbers. I also referred to poaching and the numbers of poachers caught on a regular basis. Poaching is so widespread in Africa that one hardly knows where to start, but I did refer to the experiences of one park warden in the Serengeti. This was Myles Turner, who was there for 16 years and documented his work in his fascinating 1987 book titled My Serengeti Years: The Memoirs of an African Game Warden. I suggested that his book might just as easily have been subtitled The Poaching Wars.

One of the major tools for poachers is the snare. Here are a few examples of ones I have seen in various places. In Namibia’s Etosha National Park there is even a sort of “rouges gallery” in the park offices where this display case shows various types of snare that have been found over the years.

When I worked on an elephant project in Rwanda in the 1970s we found that 27% of the animals had injuries related to snares. 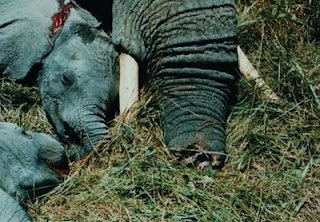 There was one that had a cable deeply embedded in the creatures leg, while several animals had lost part or all of their trunks because they are ever curious and made the mistake of picking up snares meant for buffalo and the like.

When I was with veterinary students in Uganda’s Queen Elizabeth National Park we never failed to see animals damaged by snares, or find snares, usually at waterholes. 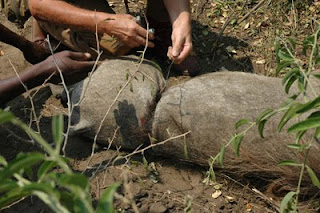 We were able to free this warthog after immobilizing him, but I do wonder how he got on. 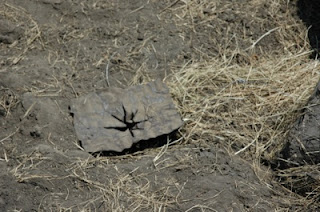 We found a collection of wire snares including the nasty tin can lid type that is designed to ride up an animal’s leg if it is unfortunate enough to stand upon the thing. Just have a look at the picture and imagine what will happen.

It is easy enough to condemn the poachers, but the issue is not that simple. "Poacher" is a term used by landowners to describe people who might otherwise be known as hunters. If you have no source of protein, virtually no income, and a family to feed, and a wild animal hangs out near your home, what are you to do? This is not the same as the commercial, crime syndicate type of poaching that has led to the decimation of rhino and tiger populations, to mention but two of hundreds of species.

The news about a major highway that will cut through the heart of the Serengeti has been simmering for quite a while, but now seems to have surfaced in major print media. More on this when I drop by again.
Posted by Jerry Haigh at 5:44 AM

You know how to make me cry!!!! Diane