In my post of June 15 I alluded to the simmering controversy about the building of a new highway through the heart of the Serengeti. Now comes a front page article by Geoffrey York in the Globe And Mail of June 14 that offers a balanced view of the issues. 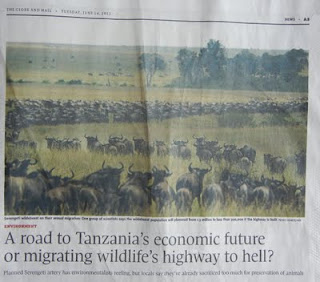 You can view the article and the lively discussion that follows here and also see better versions of the maps that I have photographed and attached. 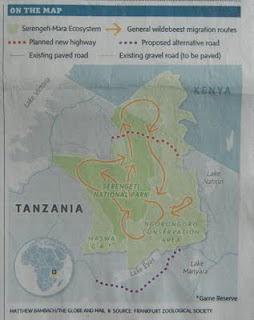 For the conservationists it is a simply matter of the desecration of a pristine environment where the greatest animal migration on earth still occurs. Of course the wildebeest gets the biggest mention and also both of the photos. A brief mention of other species is made, but everyone tend to forget that zebras are also an integral part of the events and that the predators that act as camp followers also move around with the great herds.

For the protagonists of the road it is really quite simple and boils down to two issues. The first is that the land was originally occupied by humans but they were kicked out by colonial governments when the park was formed. It began as a small game reserve, mainly to protect over-hunted lions in 1921 and was finally established in 1951. The second issue is that the people to the west of the park are almost cut off from easy commercial activity because all trucks have to skirt a long way to the south before heading to the commercial centre of Dar es Salaam.

There are other issues that are relevant.

The people in the region are living on less than a dollar a day. The human population has ballooned since 1951. According to Guardian.co.uk website statistics in 1950 there were just over 7 millions people in what was then Tanganyika. Now there are over 46 million, an increase of 504%. They need to eat. It is impossible to imagine that poaching will not increase as road access becomes easier.

A quick look at the map and the proposed route for the new highway shows that it cuts right across the path of the migration as the animals head north into Kenya and the Masai Mara, the county’s major tourist magnet. Nobody knows how that will affect the movement of the animals, but I’ll bet that the Kenyans are concerned.

The second thing that gets little mention is the potential for a huge number of traffic accidents. 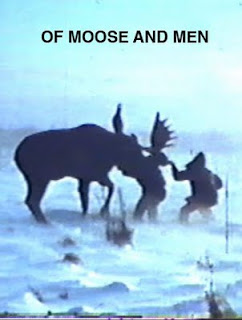 In my new book Of Moose and Men I have quoted statistics from Sweden about vehicle x moose accidents. They have long been a major problem and in 2010 there were 7227 reported to police. What, you may ask, has this got to do with the Serengeti?

There are about 350,000 moose in Sweden, and they do not engage in mass migration. There are said to be about over a million wildebeest, and another 250,000 zebra in the Serengeti/Mara system. One environmental study quoted by York has it that trucks will be traveling down the highway at a rate of one every thirty seconds. When I round the African figures to 1.5 million animals that is about four times as many accidents-in-waiting on a single road in the Serengeti as on all the roads in Sweden. I think that spells carnage. Carnage for the animals, carnage for the trucks and other vehicles.

I have written this comment a dozen times and I just get angrier and angrier. I will now limit it to I hope it never happens!!!! Diane