I’m posting this as a storyteller and member of the national storytellers association http://www.sc-cc.com/ rather than any one of my other alter egos. Last Sunday I was one of nine members of the Saskatoon Storytellers Guild (we are on Facebook) who joined moderator and workshop leader Kevin Mackenzie (find him here)in a 3-hour session on humour. After a relaxation exercise we all told brief anecdotes about a memory of something in an early part of our lives, or in my case, in my grandson's five-year old life. 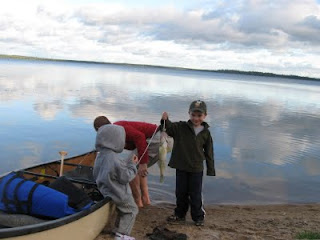 This was about the time that he caught his first fish. We were camped by Namekus Lake in Prince Albert National Park and were out in our canoes. Mathew had cast his own line while his dad, Charles, paddled along about twenty metres from me as we worked our way a hundred metres or so out from the shore. Suddenly I heard Charlie say, “Son, you’ve got one on.” Pretty soon the fish was alongside the canoe as the lad acted on the advice to keep his rod tip up and wind away on the reel.

As Charles brought the pickerel (walleye) into the boat the boy exclaimed, “So that what this is all about.”

We turned back towards camp in order to show the rest to the family the spoils of the excursion and Charles said, “Would you like to put your line back in again?”

He sort of sighed and said, “No Dad, my nerves are having party, I don’t think I could handle it.”

We all shared similar little vignettes and then got to the meat of the workshop. This was to watch Elna Baker perform a set at what was called the Rejection Show, a stand-up comic storytelling session in New York. It’s must-see for anyone, just as a great piece of humour. As an exercise it is amazing.Kevin had himself been at a workshop given by Doug Stevenson and from that session he developed a list of twelve techniques that work in humour.

There may be more, but these are the ones we tried to identify. Self effacement; hyperbole (which can be over or understatement); juxtaposition of illogical ideas; creating a context and then breaking it; the use of similes, which can be ridiculous; metaphors (which are like similes☺; tongue ties; triple or “rule of three”; idioms; false assumptions, double entendre (which does not need to be naughty); and puns. We had no trouble finding ten of the twelve.

Our last exercise was to work in pairs and try the techniques in our own stories. I used a brief extract from my new book Of Moose and Men from a chapter titled Sex and Antlers in which I demonstrate that size really does matter. 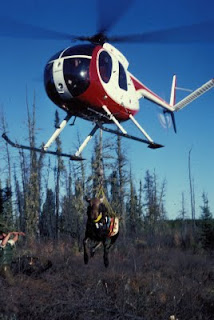 This picture comes from the book.

My work partner, who also works as a face artist, clown and a country newspaper reporter, was Danica Lorer who told me story in which she advised that one should never give one’s seven-year old the car keys. You can find out more about her here

It was a well-spent afternoon.

I have deliberately not given you think link to Elna’s piece up to this point, because you would have moved away and then lost your train of thought as you laughed. Now is the time, here is the URL. You can also look her up on Google and find other pieces. Enjoy!
Posted by Jerry Haigh at 8:14 AM