One of my favourite pastimes is storytelling. When we visit my granddaughters one of the first stories they ask for is How The Zebra Got His Stripes and here is a condensed (very condensed) version.

A long time ago, when zebra was pure white, a brave young zebra decide the challenge baboon for access to water, which the latter had claimed for his own. After a long and terrible fight baboon began to get the upper hand and pushed zebra into a fire. The pain was so severe that the zebra jumped up and lashed out, kicking the baboon clear across the river where he landed on some rocks. The upshot, the zebra was scarred for all time, but the baboon ended up with a bare backside after damaging itself upon landing.

It is no surprise that folklore about other animals, particularly leopards and serval cats, tell how they got their markings after ending up involved with fire. 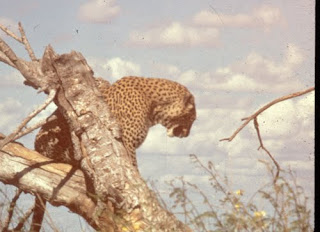 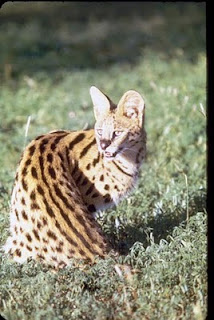 Here are a couple of pictures that you might enjoy. The smaller serval cat was a bottle-raised animal that lived in Kenya's Meru National Park around the home of chief Warden Peter Jenkins and his family in the late 1960s. I have stories about Peter in both of my books.

Another fun component of storytelling is trying to find ways of linking these ancient and entertaining interpretations of the things that people saw around them to modern scientific explanations of how things work and for me it has always been a challenge to do that with these “burn” stories.

Like the mythical American cavalry of the old Hollywood Westerns, or the more modern arrival of the marines (satirized so brilliantly by Tom Lehrer) science has come to the rescue.

In a posting of April 7th headlined Study Reveals How Creatures Get Spots vs. Stripes
LiveScience managing editor Jeanna Bryner takes us into recent information about fruit flies and their markings, and links us back to her own older post about leopards and their spots.

“Biologists have long wondered how leopards and other mammals acquired their distinct and uniform coat patterns. In 1952, British mathematician Alan Turing developed an equation to explain how simple chemical reactions produce the spots, stripes, and swirls that decorate a variety of mammals.”

By a strange coincidence I have a weak link with Turing, as he was at the same school as me (although of an earlier generation). He has been dubbed by many in the field "the father of modern computing" and is known to have had a huge influence upon the ENIGMA machine that let the Allies break to German codes of WWII. 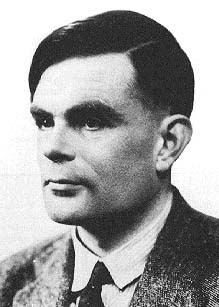 Here is a photo of Turing that I found on line. I could have chosen any one of hundreds, as a Google search for them got me to 49 pages. A second family link to Turing ties in with the fact that my daughter is heavily involved with computing, artificial intelligence and the world of robots. For the folks in her world Turing is an icon.

Anyway, back to leopards, zebras and the spot/stripe question.

Turing's mathematical model could not account for the evolution of markings as the leopard matures from spotted cub to rosette-dappled adult.

As a Bryner relates a team of scientists from Taiwan’s National Chung-Hsing University in Taichung and England’s Oxford University “modified Turing's model and ran it through computers, concluding that substances called “morphogens”, chemicals secreted by pigment cells in the coat, diffused through the coat and led to the development of the distinctive patterns seen in adults.”

A really positive clue came from more recent work with a species of fruit fly, which are much easier, cheaper and safer to study than big cats. In this case the wing spots, which are the natural pattern, were converted into stripes by means of gene manipulation and understanding of the location of the morphogen-linked gene. "We can make custom flies," said Sean Carroll, a molecular biologist at the University of Wisconsin-Madison, and the senior author of the report published this week in Nature and referred to by Bryner.

Of course none of this explains the weird story of the quagga, an almost mythical beast that actually existed in the most southern regions of South Africa and was exterminated in the late 1800s. The quagga was a form of zebra that only had stripes on the front half of its body, the rear half being self-coloured. 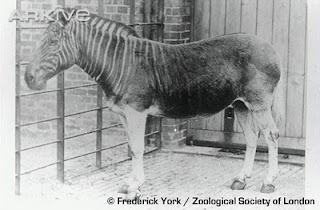 The last known one died in an Amsterdam zoo in 1883.

When I was in South Africa in the early 90s there were several groups exploring the possibility of doing a sort of Jurassic Park experiment to try and re-create the quagga from DNA in old hides. I later heard that they had abandoned the effort when they discovered that it was just a type of zebra.

In another LiveScience posting titled How A Zebra Lost Its Stripes an analysis by a team of German and US scientists show that the quagga diverged from plains zebra in Africa during the last Ice Age. It then developed the colour markings that made it look as if it might have come from a Dr. Doolittle story.

Or maybe it was another white zebra that got into a fight with a baboon but only got burnt on the front half of its body. It's just a question of what you choose to believe.
Posted by Jerry Haigh at 9:55 AM

I just stumbled upon your blog by coincidence, and I'm amazed by all the work you do! I know this is forward of me, but I'm a current undergrad (Junior level) with a passion for wildlife, conservation, and veterinary medicine. I've been working with primates for the past three years, and I'm recently starting with larger wildlife. I guess where this is leading is to...

How easy or difficult was it for you to break into wildlife medicine after Vet school? What school did you attend? I'm not sure if there are any in particular with specific aims at wildlife training I should be applying to.

Is there any advice you could give to someone whose dream is to be in your shoes one day?

Hi Liz,
Thanks for yours & the kind words.

First, up, remember that I got I into wildlife medicine at a time when there were not many vets involved anywhere in the world. Maybe half a dozen in Africa, at most. I got in because I played a fair game of tennis 45 years ago! I’ll leave you to figure that one out from the books, but it did require a mix of sheer luck and willingness to give things a try. I still may be the only vet to ever give an enema to a constipated rhino, and she was just the second rhino I had ever examined medically. If you want signed copies of the books, let me know.

As for the NOW. Your success will depend upon where you are based, and your mail does not tell me that.

First up, find out what sorts of students programs there are out there for the summer months. Students from the Western College of Vet Med are involved in at least 3 projects in Africa right now, either with Global Vets or the Canadian arm of Veterinarians Without Borders/ Vétérinaires Sans Frontiéres.

I just had a call yesterday from one group who are in Uganda, working with faculty there on a large predator program. Other schools have similar programs in many corners of the world.

Second, find out what sorts of programs are available in your own school. Most schools have some sort of wild bird, wildlife rehab or marine mammal clinical club. Join it, and you’ll be able to network.

If there is a faculty member involved in wildlife work, see if you can get a summer research or tech job with her/him.

Start looking at post-grad programs all over the world. These days it would be hard to get into the world of conservation medicine without a post-grad degree. Find one that excites you. If research is not your thing, there are internships in zoo medicine, but I don’t think there are in wildlife programs.

Then of course, work hard, have fun & GOOD LUCK.