Bushmeat in the USA

Tonight I have a gig with the Saskatoon Nature Society and my topic is The Trouble WIth Lions: A symbol for Africa's wildlife. As I indicated I am using the lion only as a symbol and I have added an extra subtitle in my opening slide which is (and other continents). 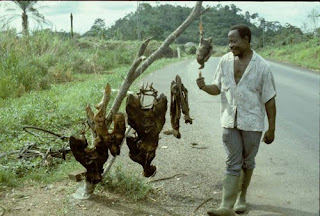 I took this picture in Cameroon in 1997. In it you can see several species for sale as bushmeat. The three at bottom left are smoked monkeys of some kind, but the treatment has rendered them beyond identification, or at least field i.d.
This morning, when I opened up my email I found a letter from my main listServ source on wildlife issues which is theWildlife Disease News Digest, put together by Dr. Cris Marsh of the USDA. One of the links in that document reads Bushmeat Diseases Entering New York and so of course I opened it, as I have been following the bushmeat situation for many years now and my last post about it, of nine, was on Jan 11th. This concerned the trail of the Liberian woman who was convicted last year of trying to smuggle 720 pounds of baboon and warthog meat. She had used the innovative defense that the meat was for religious purposes and claimed the right to freedom of religious expression.

In the online Discovery News of yesterday it was reporter Jennifer Viegas who summarized the newer events and the finding by colleagues in the Wildlife Conservation Society of a virus called simian foamy virus in three primate species: two mangabey monkeys and a chimpanzee. 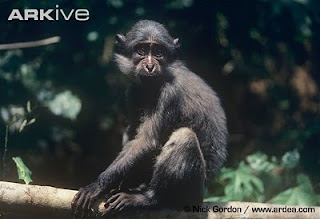 This photo of a sooty mangabey was taken by Nick Gordon and was available n the Arkive image web site. For those familiar with the AIDS story, it was from these very same species that the disease has crossed into humans on at least seven occasions in the last hundred years.

Viegas goes on to report that Inspection and health officials have seized hundreds of samples of wildlife and wildlife products coming through luggage and mail parcels through main entry points for both people and goods into New York City and the United States. Samples have been taken from at least 14 species, including great apes, monkeys, rodents, and bats.

She also states that officials of the U.S. Fish & Wildlife Service say that more than one billion individual animals were imported into the United States from 2000 to 2004, along with over 11 million pounds of bushmeat and other animal products. That’s one billion animals – 1000,000,000!

Is this the forerunner of a coming plague?
Posted by Jerry Haigh at 1:07 PM