The photo posting on the BBC website today flashed me back to Africa and the game of Kiothi that is played in the Meru region of Kenya north and east of Mt. Kenya. The BBC story is set in the Southern Sudan where the game is called aweet. Kiothi is the Meru name of the game known widely in East Africa, especially Zanzibar and Tanzania as Bao, but with plenty of local names and variations. A wider name is Mancala, which is described on a Wikipedia page. Good players can see moves way ahead, and the game proceeds at lightning speed. The clicking almost sounds like a rapidly played game of Mahjong.

The Most boards have four rows of eight or ten hollowed out depressions in which seeds, stones or whatever is available are placed before the start and then moved according to a strict set of rules. 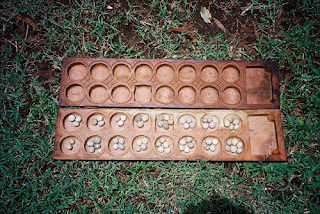 Here the eldest son and daughter of one of the rangers in Queen Elizabeth National Park in Uganda are playing. 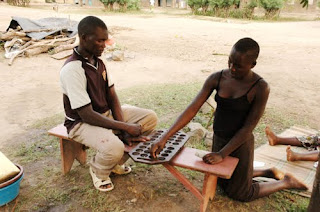 Others boards have two rows of ten, and I have seen sets in which there were two rows of seven. Some have single larger hollows at each end, others don’t.

I have the board and seeds of the Meru version and also the rules that were translated from the Kimeru language by the late Len Lemoine who was a schoolteacher in the area in the 1960s. Len even told me that he had seen the game being played in the West Indies. Given the history of that part of the world this is no big surprise.

It is not just on wooden boards that the game is played. I have watched men (exclusively men) playing near a watercourse at Laisamis, in Kenya’s Northern Frontier District. They simply fisted out depressions in the sand, picked up some pebbles and went at it.

There are older, no doubt much older and once permanent, places where tournaments may have been played on huge rocks that have had rows of hollows ground into their surfaces. 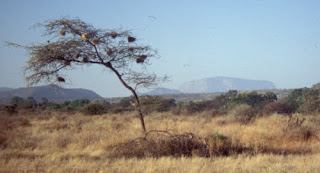 The ones I have seen are located north and east of Mt. Kenya, two of them on the iconic flat-topped mountain called Ololokwe (seen here beyond and to the right of a nest-filled acacia) and one to the east of the town of Meru near what is now a small village surrounded by smallholder tea plots but was once in the middle of the forest that covered the Nyambeni hills. 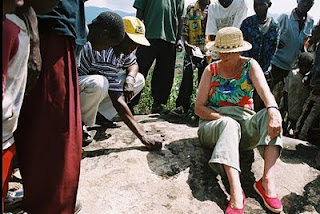 It was here that I took the photo of my wife Jo and Patrick Mugambi playing a mock game as a crowd of children looked on. Another ancient site must have been somewhere in the Ankole kingdom of Uganda. 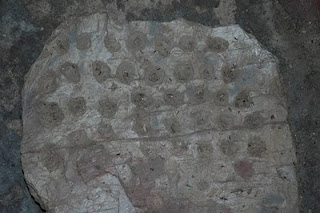 At the heart of that kingdom I found this old rock with Bao indents ground into it - eight by five by the look of it, with no end depressions. Who knows how old this one is or what the rules were, or maybe are?

The rules are too long to quote fully here, but here are one or two titbits. If any one has a hankering to make a board they can email me for the rules that I can send as a pdf. I suspect that the Meru Kiothi rules will only work properly for the board with two rows, as opposed to four. Those who want other rules can no doubt find some at one of the websites or even books devoted to the game 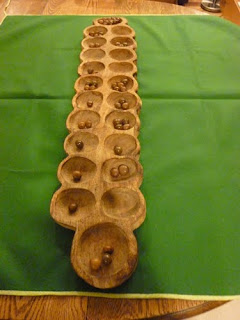 This picture, taken at home, shows our board that was made forty years ago by a craftsman in Meru. In the hollows are the marble-sized seeds of the Caesalpinia tree (Njothi in Kimeru) with which the game is played in that part of Kenya. Caesalpinia is a genus of prickly, scrambling shrubs with bi-pinnate leaves and vicious recurved spines. These seeds must be some of the hardiest around because they float well and can remain viable after spending two, or more, years afloat.
The board has ten hollows on each side, with larger indents, known as bomas into which captured stones are placed. The object is simple, to capture more stones (representing cattle) than one’s opponent. But not that simple. Some tribes rate a one-warrior victory as equivalent to two normal victories; some rate it as worth ten victories by any other margin.

The game can only be played by two people at a time. In Kiothi each player is given 30 warriors (seeds that look like acorns – or stones or what have you.) They are placed in the six right hand bomas on each side – five warriors to a boma.

The order of play (who goes first) can be determined by various means but the toss of a coin is as good a way to decide as any. The first player may move any of the warriors in any of his bomas, provided that he moves always to the right depositing one warrior in each of the cups beginning with the cup immediately to the right of the one from which he has taken the warriors and provided the last warrior does not land in a boma that is already occupied by one or more warriors

To begin the game, each player is permitted to take the five men form each of two of his bomas and place them in any of the cup – on either side of the board. For the rest of the rules, drop me a line. They may look simple, but only a simpleton woud take on an expereinced native player for money.
Posted by Jerry Haigh at 9:51 PM

I was in the Peace Corps in the Misuku Hills, Malawi, along the Songwe border with Tanzania to the north. The 4 x 8 row game was called Usoli in Chindali-Chisukwa, the local languages. In the language of the northern region, Chitumbuka, it was called ncheu; and like yours, mbao in Chinyanja, the national language. Village social structures were built around proficiency. I used my skills at it to make friends and set people at ease as a mzungu stranger.