Walking in the rain forests of Cameroon was a new experience for me in several ways. It had either just rained, or was about to rain all the time, that is if it wasn’t actually raining. This was 1996 and I was working on a forest elephant project for the Wildlife Conservation Society in the Korup forest on the west side of the country. As I recounted in chapter 10 of my book The Trouble With Lions I learned from our tracker, James Ako, that the hunting and eating of a tortoise was taboo. He did not explain why, and I forgot to ask. 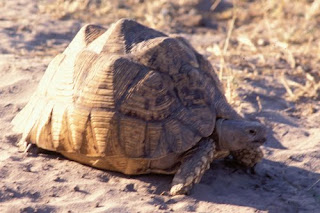 Now I know at least one explanation.

It comes in a 1967 collection of folk tales from Ghana titled Tales of an Ashanti Father that I have just added to my little libray. The author, or maybe she should be called collector, of these tales was Peggy Appiah. In a story called The Hunter and the Tortoise, which I have shortened here, she tells how a hunter went into the forest with his gun and was enchanted by a tortoise playing an accordion. He challenged the animal and gave it the chance of returning to his village with him or being shot. “How can I not agree seeing you have the gun?” replied the tortoise.

As he bent to pick him up the tortoise warned the hunter “I am a creature of the forest and not of the town. If you take me to your home you will have only yourself to blame.”

At home the hunter rushed to the chief to tell of his find, and the skeptical chief told him that if he was lying he would be executed, but if he was telling the truth he would be richly rewarded. As you can guess, the tortoise merely sat and looked stupid when the hunter tried to exhibit him.

"Trouble does not look for man,
It is man who looks for trouble."

The upshot was that the chief decreed that that the tortoise be taken back to the forest where it was happiest. He also stated "From now on the hunting or capturing of tortoises in the forest will be taboo to my people. Anyone who is found interfering with them will be executed."

Of course the happy (sort of) ending was that the hunter, who had spoken the truth, was given a grand funeral and the tortoise was returned to his forest clearing.

Like many written folk tales this one is now in suspended animation for those reading this account, and of course I have cut it by about 70%. The conversations, the efforts of the hunter to get the tortoise to perform and the scene setting are up to the reader to convert back to the oral, but for me, it is nice to get an explanation after fifteen years. It also gives me another tale to tell that is linked to animal work in far-off places.
Posted by Jerry Haigh at 7:12 AM