Just off a good weekend at the Saskatchewan Writers Guild AGM. The overall theme of the gathering was For The Love of Words and a stellar cast of invited speakers took us through sessions on Romance Writing, Writing About Sex, Loving Language, and Writing About Love in Poetry. There were also sessions titled Love Your Guild (which told us all about the Guild’s many programs) and Promoting Your Writing.

A new board was also elected at the AGM, Here is the group photograph of most of us. 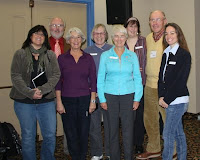 From left to right, Lisa Wilson, Bob Calder, Cathy Fenwick, Susan Hogarth, Gloria Boerma, Paula Jane Remlinger, Jerry Haigh and Danica Lorer. Susan is the executive director of the Guild, and all the others are elected. There are two board members missing from the photo. Scott Miller, who comes from Estevan had a five-hour journey home on his motorbike, so did not hang around, while Michael Trussler had not been able to get to any of the events.

Despite my concerns about the amount of travel that I do, and the lengthy absences from Canada, mainly in Africa, the members saw fit to ask me to stand as the incoming president. I would not have taken it on had it not been for the fact the several members of the board are staying on, and both Bob Calder, the past-president, and Susan, will be around to guide me through patches where I don’t know the ropes, while other board members have also volunteered to do what they can. It will be a great group to work with.

The other good news is that the folks at the Saskatchewan Book Awards have invited me to “read” at the Saskatoon brunch for short-listed authors on the 23rd of November. The event takes place in the city’s Bessborough hotel. Just like the other four authors who are listed in different categories I will have ten minutes on the podium. That will make for an interesting challenge! I will almost certainly take less than two minutes on actually reading, and use the rest to skip-stone through a few bits as brief stories.
Posted by Jerry Haigh at 1:31 PM