Met last evening with the new group of ten Canadian final year vet students who will be coming to Uganda next February. Of course there was a mass of things to discuss, not least of which was the whole issue of travel safety & insurance that the university requires them to cover. They have to take three on-line tests and keep a sharp eye on the Canada government's Foreign Affairs web pagethat has travel reports for every country especially of course for us about Uganda. If the worst came to the worst and something really bad cropped up in Uganda the trip would be canceled. Right now the biggest threat posed by a Ugandan occurs in the DRC where the leader of the self-styled Lord’s Resistance Army continues to terrorize villages and kidnap children. If the past is anything to go by these youngsters are turned into child soldiers and sex slaves. It seems as if Joseph Kony and his cronies have not operated in Uganda for quite a few years.

Enough of that stuff. Our Canadian group members are already making plans for fund raising to supper the two schools that we have helped in the last several years. School supplies, cash for new desks

and textbooks and lots of gifts have been given out. 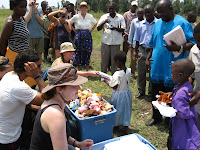 Generous donors in Saskatoon have supplied soccer uniforms and lots of other sports equipment. The boys have reveled in the uniforms and they first time they put them on it seemed as if they had grown about two inches in as many minutes – as this picture shows.

Of course we have to then play them at their own game, and we are usually thrashed, although we did manage a 1-1 tie one year.

Girls do not pay soccer, but they do have uniforms for volleyball and netball, and one year we played after a huge downpour when there was about an inch of water on the outdoor court. A messy experience, as you can see.

In February 2008 each child in grades 1-4 of the Equator Highway Primary School, which is an AIDS orphanage, received a teddy bear that had been lovingly knitted by members of the Saskatoon ladies group who call themselves Teddies for Tragedies.

Most of these kids had never had a gift or a doll before in their lives, so you can imagine the reception.

More to follow in this one as the fund raising continues.
Posted by Jerry Haigh at 11:41 AM