In December I was with my family in Kenya’s Maasai Mara. We stayed at Game Watchers delightful Porini Camp in the Selenkay Conservancy and of course saw a range of neat things. Our grand daughters had a truly grand time, as did our daughter and her husband and it was a delight to share with them some of the things we so love about Kenya. 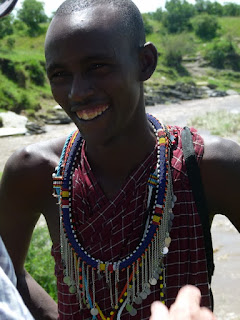 Our tour guide as we drove around was a young Maasai named Ben ole Tongoyo, who has already passed his Kenya Professional Safari Guides Association silver level tour guide test and is working towards the highest level of certificate – a gold. He was very knowledgeable about many things, but it was nice to be able to share a few things that he had not picked up on.

One was the business of why hippos mark their territory by shaking their tails as they defecate. This behaviour is only done by dominant males and I showed the girls, and Ben, a spot where a hippo has marked his exit trail to deter would-be challengers.

The business of tail wagging has led to the wonderful story, that I told Ben and the family, about the desperate desire of all hippos to live in the water and escape the sun’s burning rays. After their king’s repeated conversations with Ngai (the great god who lives in the mountains), they were allowed to do so, but only during daylight hours and under strict conditions. I’m sure you know it, so I won’t repeat it.

What I will share are the skeletons of three stories that Ben gifted me as we swapped animal stories about creatures he knew well. He is not a storyteller as such, but he gave me enough to build upon. As far as I know none of these stories has ever been published.

The first was about a time a long time ago when Maasai women had cows which were wildebeest. 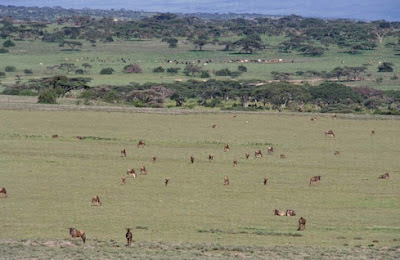 It does show some attitudes that would not be considered PC in today’s culture, but it is an ancient story. Basically the women failed to care for their charges because of the heavy and persistent rains. After many days of neglect the cows wandered off and went on along trek, returning once a year to check things out, but never again being domesticated. Instead the women had concentrate of their other tasks, hauling wood and caring for the children. Here you can see the Maasai manyatta beyond the trees and the scattered wildebeest in the foreground. Are they waiting for attention? 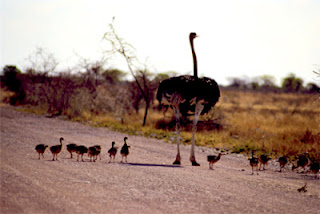 The second story was about the theft of ostrich chicks by lion and how none of the animals would stand up for the upset parents until ground squirrel showed them all up.

I’m working that one up with pictures right now. Might try and publish it. 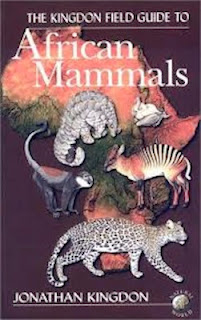 The third one was how tortoise escaped his impending execution. All the other animals hated and feared him and had decided by a vote to get rid of him once and for all . That too needs a work-up.

As we departed I left my copy of the Jonathan Kingdon Field Guide to African Mammals with Ben. Let’s hope it helps him in his efforts towards that gold certificate.
Posted by Jerry Haigh at 12:17 PM

Interesting, Grandpa. I thought you told the other hippo story, though.

YOU are right abou the "other"hippo story, but that needs a whole bunch of explanaton as it is less well-known.