Last December I was with my family in Kenya’s Maasai Mara and had a wonderful time. We saw all sorts of wild animals and of course my grand daughters thrilled to the sight of lions. I asked out guide, a young Maasai moran named Ben, if he had ever had to kill a lion. “Yes, three times” was his brief reply. I did not press further as he seemed somewhat embarrassed about it. He would have done it for one of two reasons.

In 2006, Leelah Hazzah, then a PhD candidate working for the Lion Guardian program on the Mbirikani group ranch beneath the majestic peaks of Mt. Kilimanjaro, wrote in her thesis that there are two basic reasons why Maasai hunt lions.  The best known is their ritualized Olimayio ceremony, when young men pass into manhood. The other is for revenge, and is called Olkiyioi.

It is a really nice change to be able to write a positive report about an African conservation issue. In The Trouble With Lions (TTWL) I expressed tentative hope that the Lion Guardians program in Kenya’s Maasailand would reverse the long trend of lion killing, by spear or poison, that has been going on for far too long. A hundred and more years ago, when lions ruled the roost and terrorized humans throughout sub-Saharan Africa the Masai, Nandi and other cattle herding tribes had little choice but to try and control the depredation wreaked upon their livestock. They did it with spears in ritualized hunts that “blooded”, sometimes literally, the young men whose initiation involved a lion hunt. They were the warriors sent out to fight the enemy. 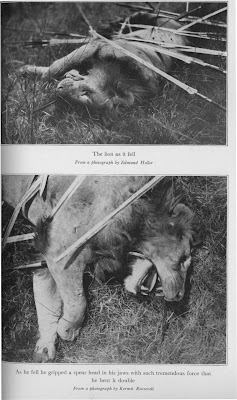 The sort of outcome that occurred was recorded by Teddy Roosevelt’s cameraman in the very early part of the 20th century. A group of Nandi had surrounded a lion and speared it The attached picture, scanned from the book’s pages, show the results.

In TTWL I recorded the information gleaned by several scientists about the decline in lion numbers throughout Africa since about 1950, when there were about half a million on the continent. By 1975 there were about 200,000. By the end of 2006 there may have been 28,000. 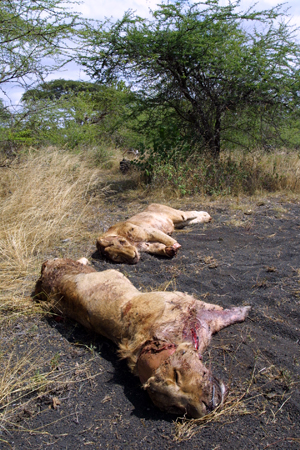 Since those spearing events new ways to kill lions have emerged. Of course “white hunters” took their trophy toll with heavy rifles, but these were by no means the only methods. The most insidious are snares and poison. These two lions, poisoned with Furadan, a compound banned in the USA and Europe, were photographed by Amy Howard after the killers had stripped their manes. I have blogged before about Furadan and you can find those stories by going to the index at right.

A typical snaring may take a lot longer to kill a lion, or any other victim. This one had been snared in the Serengeti NP when veterinarian, friend and former student Dr. Patrick Garcia came across it and watched its death throes. 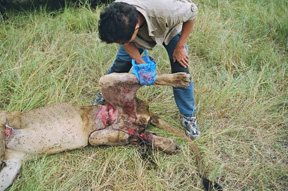 The good news is that in parts of Maasailand the killing has stopped and young men are now actively engaged in lion conservation. You can read all about it, and a whole lot more, in the Lion Guardian’s annual report here, and I urge you to take a look at it, even at the risk of taking you away from my own page. Check out the 2011 report to see how things have changed. This is an important stuff!

Here is the picture taken by Leelah Hazzah of a moran named Mokoi using a telemetry receive to track one of the lions on the ranch.

Leelah, now more properly known as Dr. Hazzah, after receiving her PhD, is now the Lion Guardians Director, but of course the credit for initiating all the work goes to Dr. Laurence Frank of the University of California, Berkeley who has worked on large predators for over 40 years and is the Living With Lions Project Director.

As I said, a happy story. Long may it continue!
Posted by Jerry Haigh at 12:30 PM

Love your explosion of hearts on the clicking onto the comments. Happy Valentines's Day. This is great news. I just did not like you pictures this time, it makes me so sad. Just off now to look at the report. Diane