We were back in Kenya just before Christmas and spent time with many of our old friends. One of the delights was the chance to walk in their amazing gardens, where it is almost more difficult to stop plants from growing than it is to cultivate. We found this out many years ago when the sticks planted to support tomato plants grew at about the same rate as those delicious salad suppliers or, when fried, part of a complete breakfast.

Over the years I have had a passion for photographing birds and here I’m going to add a few of sunbirds, the crown jewels that flit about and dip a beak into any bright flower, or the myriad of feeders that some folks hang out. Although sunbirds are not related to the other crown jewels —the humming birds of the Americas—they do fill more or less the same niche.

This is a male bronze sunbird, aka "bronzy". They are usually found at fairly high altitudes. I have seen them most often at anything from 8500 to 7000 feet. 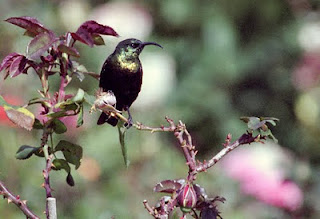 The female bronze sunbird has more defintion than the females of many species. 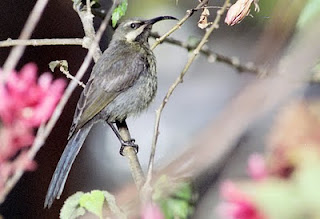 And this tiny fellow is a collared sunbird, photographed near Gilgil in an orchard. He is one of the smallest members of the family. 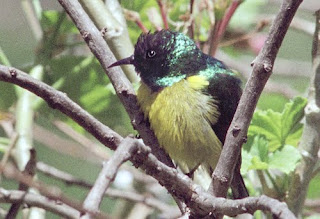 This is a male double-collared. He is drinking from the outside of the flower, where there must be some nectar, or else he has speared his beak through the petals. Does anyone know? 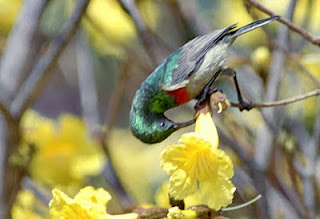 And this is the female of the species. 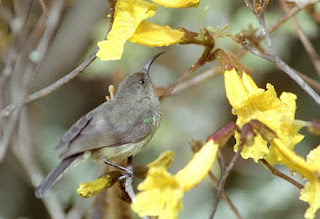 One major difference between hummingbirds and sunbirds is that the latter do not hover, but this one —the variable sunbird— nearly makes it. 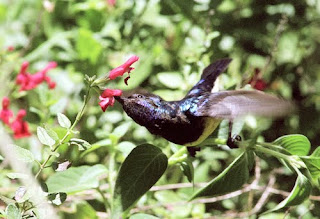 This golden-winged sunbird was feeding on aloes near Naro Moru in Kenya. He was one of may that appeared early every morning, having flown down from altitudes of about 9000 feet up the slopes of Mt. Kenya. All I had to do was sit still in amlong the aloes and take my chances. 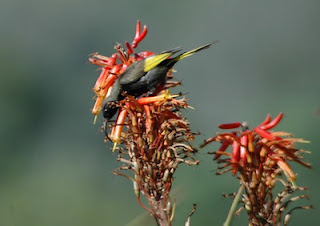 Double-collared sunbirds also live at fairly high altitudes. This one was in a garden near Timau, at about 8000 feet. 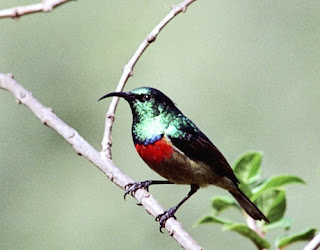 This red-chested sunbird was one of eight species of bird that were in what was almost a feeding frenzy in an Erythrina tree in Uganda's Queen Elizabeth National Park. 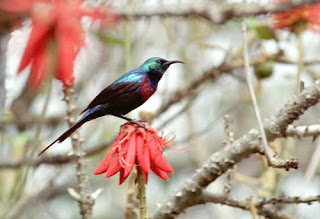 The aptly-named Scarlet-chested sunbird was another one that came to that tree. 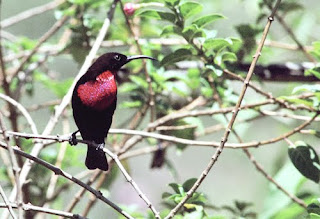 My final one for today is a picture of a moment I was lucky enough to capture in the life of a a green-headed sunbird male in a garden near Gilgil. He looks as if he is practising for an audition to The Muppets. Gonzo maybe? 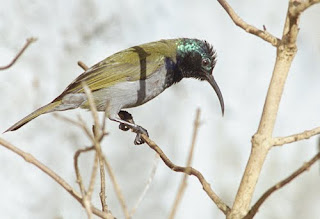 Fantastic photos of a beautiful bird. Sadly my little camera is not good enough to take photos of birds unless they are very tame and very close!!! Diane

We took a trip to Costa Rica many years ago and one of the party had a "point-and-shoot". She was from New York and her idea of getting bird photos was to run as fast as she could towards them and try to get a snap. This didn't give the rest of us much chance and she was soon ostracised. Of course, as she was a New Yorker, this made not the slightest difference to her behaviour. I don't imagine you or anyone else truly intersted in wildlife and conservation would try that these days.