More on Rhino Horn and Poaching

My blog of Nov 29 about rhino poaching was written before I went with my family to Kenya. While there, and since I got back, more disturbing news has been reported.

The use of rhino horn as part of Traditional Chinese Medicine is ancient, nobody knows how ancient, and as I have blogged before the situation continues to be a nightmare for conservationists. I used one example of many in The Trouble With Lions when I quoted Judy Mills who, in a TRAFFIC report found that 60 percent of South Korea’s doctors believe that rhino horn is an effective medicine and 79 percent believe it to be essential for a wide variety of ailments.

Yet another South-East Asian country seems to have joined the “hunt” for rhino in South Africa. For some reason the finger-nail-like substance has gained an entirely false reputation as a cure for cancer. Vietnamese hunters, have arrived in South Africa and in one report titled mules hunting rhino -check it out- are seen to be active, with a video report by Dan Rather even appearing on the planetsave.com website.

Recent African twists in the ugly saga come from three countries. First, two places in Kenya, where Mugie Ranch, on the Laikipia plains west of Mount Kenya have given up their attempts to keep black rhino because of the steady decline of their original number of about 30 head as poachers took them out one at a time. The Kenya Wildlife Service moved in a translocated them all (apart from the one they lost during the drugging). In some ways sadder was the poaching of a single hand-raised rhino at Sweetwaters Conservancy. I last saw him three years ago when I could scratch his neck as he contentedly chewed on a stick of sugar cane. Now some callous sod has taken him out.

Are these two still there? - I took the photo in South Africa about 15 years ago. 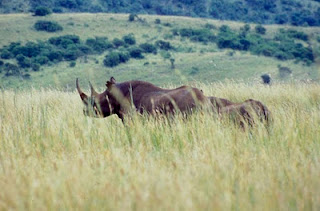 Then there is Namibia, where officials in the Ministry of Environment and Tourism, and where has been apparently granted a Vietnamese man a hunting permit for the trophy hunt of a rhino on the Otjiwa Safari Lodge.

The same article in the Namibian Sun quoted the Deputy Minister of Environment and Tourism, Uahekua Herunga, as saying that the government should also look into “legalizing” a trade in rhino horn. Presumably he is suggesting some sort of “farming” for horn. What next?

In many ways more chilling than either of the things going in these two countries is the news from South Africa. I have mentioned before that one of my former students told me about two vets who have been implicated in poaching. Now I’ve learned more about them. In an article published on line they are named as Karel Toet and Manie du Plessis (and their wives) They are suspected of involvement with a rhino horn syndicate headed by Out of Africa Adventurous Safari’s Dawie Groenewald. The veterinarians (and other “Groenewald gang” members) will face charges of assault, fraud, corruption, malicious damage to property, illegal possession of firearms and ammunition, and contravention of the National Environmental Biodiversity Act when they return to court in April 2012.

If you think that is bad news and a slap in the face for wildlife vets, there is more. One of South Africa’s most prominent wildlife vets is Dr. Douw Grobler. He is a former head of the game capture unit in the Kruger National Park and was arraigned in Pretoria North Magistrates Court. No charges were laid but he is suspected of supplying veterinary drugs to a controversial game farmer and hunter named Hugo Ras, who has several previous convitions related to nature conservation transgressions and was arrested last August.

The case was postponed to February 28th and Grobler was released on R5,000 (USD $618) bail. You can read the full story here.

Of course Grobler may have been falsely accused, but the picture is not pretty and certainly puts all wildlife vets in Africa under a spotlight.
Posted by Jerry Haigh at 2:18 PM

hi Jerry, my name is Roberto Morais I am a South African born guy and I want to know how could I help in this fight against poaching! I think it is ridiculous and it has to end! when last were you in Sout. African? And are you coming back?

Hi Roberto,
Thanks for taking an interest. The more people show concern the better. One thing you could do is to contact authorities in the Kruger and the conservation oprgnizations. As for our next tip to SA, I'm not sure, but it won't be long. We have many friends in your part of the world.
Best wishes,
Jerry

Thanks I will do that. A freind of mine and I are actually trying to spread the word within the youth of our town, we have big plans but we just need the backing of one of the major Rhino poaching organisations to kickstart this campaign.... So holding thumbs

If and when you come to South Africa let me know if I can do anything to help you.

Thanks a million.
A friend and I are trying to raise awereness within our local area, we have a good plan and a couple of people who could help out a lot but we just need an organisations name to almost create a satilite organisation for us , that way we can try get the word out in other areas.

Cool well next time you are in South Africa, let me know if there is any way I can help.

Thanks a lot and keep on informing! People will take a stand against this!