Link
On Saturday we went to the movies. We had chosen to go and see the story of France’s Chauvet caves, discovered in 1994 by three men. There are several web pages about these extraordinary findings, and one can find the fantastic drawings on some of them. The movie, directed by Werner Herzog, is called Cave of Forgotten Dreams and for those who don’t know about them these caves are absolutely extraordinary. The art work has been dated to be in the region of twenty-five to thirty-two thousand years old. This is at least twice as old as any other ever found, the other famous ones being the Lascaux caves, also in France. Of the many images, two in particular have caught my imagination.

There are two rhinos fighting, their horns crossed like a couple of fencers squaring up.

My own work with rhinos has shown me direct evidence of these behemoths fighting, especially when in the grip of sexual foreplay. The whole process can last up to an hour before any kind of mounting. Both of my cases were in white rhino, animals that had been brought up form South Africa in the late 1960s. Of course at that time we had to state that they came from Lesotho because Kenya and South Africa were not diplomatically linked, Apartheid being the political climate in the latter. The first case was a cow that had been picked up a bull, on the end of his horn, and slammed into a big pepper tree. I was district veterinary officer in the town of Meru, east of Mount Kenya and when Peter Jenkins, the chief park warden in Meru National Park called me I headed out as soon as I could.

I really had no idea what was wrong and decided on a shotgun treatment, a big dose of antibiotic and multivitamins. The challenge was how to get them into her. In the end I simply drove a long needle into the muscles on the backside and was astonished when she stood there eating the hay that her minders had given her.

Rhino are not the brightest start on the planet and it was only about half way through the treatment that she noticed my attentions. She began to walk away, and so my injections ended up being given “on the run” My efforts did no good and when she died two days later Peter told me that she had a broken rib and a ruptured liver. It is amazing that she lived as long as she did., but the astonishing thing to look back upon is the power in the bull’s neck. The cow must have weighed close to 1500 kg! 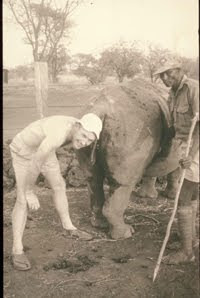 A year later I had to treat another cow that had also been attacked during foreplay. In this case the damage was limted to her hind end, but was so severe that she had not been able to pass stool or urine for 3 days. After evacuating her rectum I administered a 4-gallon enema - and have evidence of the event in the photo that my wife took. This time the treatment, which also included antibiotics, was a success.

The other image is the multi-legged bison. The artist drew eight legs, some of them paler than the others, and in forward positions with bent joints. Everyone, including me, thinks that the images are made to look as if the bison is running.

I have taken this an extra step in my imagination. If you, as a child of about six or eight, are in the cave with your dad and suddenly hear the sound of running bison in the background, followed almost at once by the sight of a flare being waved in front of the animal on cave wall, the legs will come in and out of focus, just as if the animal is running. Are you holding on tight to your dad’s knee?

There are lots of other stunning images and the movie producers have done a good job of telling the story. The last set of pictures are not inside the caves, but are a spooky postscript about a nearby nuclear plant. I won’t tell you any more. Go and see the movie.
Posted by Jerry Haigh at 6:50 AM

Sounds like a good film to look out for. We have been to the Lascaux caves but maybe these would be worth a trip sometime.
Not sure I would be happy treating a rhino, especially up its rear end :)
Diane

Diane,
I too woud love to go the caves, but they have been closed to the public. As the movie shows, the Lascaux caves have been badly damaged by condensation and humidity of human breath, hence the closure of Chauvet. The web and the movie are one's only option!

I have been hoping to hear from someone who had seen the film as I heard a radio interview with Herzog and knew this would be the only way to see these painting. Thanks for posting this.

Hi Elinor,
Glad to have alerted you to it. Hope to see you in Montreal in August at teh Storyteller gathering. The start is on the evening of the 1st. Am I right? Best to you both.