Just back from a magical time in Moose Jaw, Saskatchewan (Yes, there really is such a place, and it has an amazing history linked to Al Capone).

I attended the Festival of Words, a three-day event dedicated to words in every imaginable form. It all starts with a film, then moves to an aptly named Readception on the first night. It is here that those attending get a chance to visit old friends and make new ones while listening to short readings from half a dozen or so of the authors who are set to strut their stuff over the next two-and-a-half days.

The Friday and Saturday are filled with readings and performances from a long list of authors in every imaginable genre. You can see the list by going to the Festival Web site.

I was lucky enough to be invited to read from The Trouble With Lions but, as usual, I told rather than read. The business of telling came to me when I was advised by Henry Woolf, long-time Saskatoon resident, well-known Shakespearean actor and friend of the late Harold Pinter advised me to use it, rather than straight reading, and it seems to have worked. This gave me the chance to show slides and tell stories rather like the Cantastoria tellers of Europe in the Middle Ages, or the itinerant Kamishibai tellers of the Orient who used picture boards to enhance their events. What is PowerPoint but a modern storyboard? 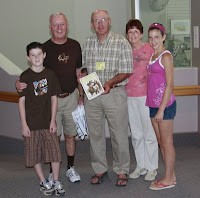 I was also honoured to be able to represent the Saskatchewan Writers Guild at the Friday luncheon when a formal plaque to the Guild was presented by Saskatchewan's Poet Laureate and long-time Moose Jaw resident Robert Currie (not to mention Festival chairman) . This year’s Festival was dedicated to SWG in honour of its 40th year. It is the oldest such Guild in Canada. There is lots more about the Guild on their web site here.

In my brief talk after the presentation I quoted lines about words and writing. Here is one of them from Franz Kafka.

"A book must be the ax for the frozen sea within us."

The Festival Of Words certainly thaws to the core when it comes to books and words. If you haven't been to one, think about it for mid-July next year. It's worth the effort, many times over. Here's the baited hook. Saskatoon's Yann Martell will be there as a featured presenter. Have you booked your hotel room yet?
Posted by Jerry Haigh at 11:48 AM