Yet another poaching story out of Africa has appeared on the BBC webs site. This one involved both ivory and rhino horn found in coffins on a flight that originated in Mozambique and was bound for Thailand and Laos. There was no mention of any DNA analysis, but these days the source of both items can be accurately determined through careful study. Perhaps that information will follow.

In this case 300 kg of ivory from 16 tusks and an unstated number of rhino horns were seized. 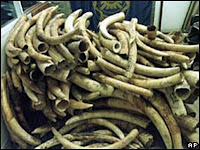 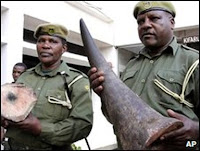 The accompanying AP pictures appeared on the web site, but it not clear if they were file pictures or from the current seizure. Not that it matters a whole lot – the point is that it happened at all. The shipment’s value was estimated by Kenya Wildlife authorities to be worth about one million dollars (US)

As most people now know the Western Media’s obsession with rhino horn incorrectly alleged aphrodisiac properties is completely wrong (although I’m sure it sells newspapers). As this lot was bound for the Far East it is virtually certain that the intended use of the horn was in traditional medicine. In a 1993 undercover survey by Judy Mills for TRAFFIC International, it was found that 70% of South Korean doctors consider rhino horn to be an essential part of their medical armament, despite clear evidence to the contrary. (See Mills, Judy A. Market Under Cover: The Rhinoceros Trade In South Korea. A Traffic Network Report. TRAFFIC International, 1993.)

This report and another in April about 500 kg of ivory poached in Kenya’s famous Amboseli NP highlight the continued struggle in Africa to preserve the small fraction of the charismatic wildlife of the continent in the face of organized crime, rapid population growth and ever-increasing hunger. This April report stated that sentencing of the two culprits, who pleased guilty to illegal possession of ivory would take place on May 4th, but I have not been able to track down any news. If past records are anything to go by the sentences will have been paltry. It would be interesting to know for sure. 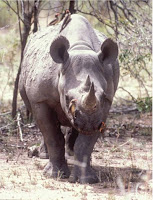 It would be nice to think that my own picture of a rhino and their accompanying oxpeckers was not the last I will take of my favourite species.
Posted by Jerry Haigh at 5:43 PM