On Saturday Jo and I attended a lovely wedding near Brandon, Manitoba. It was special because the bride, Jeniifer Currah, aka Nif, had been with us in Uganda in 2003 and we have remained friends ever since. One of my favorite photos of her was taken in Queen Elizabeth National Park and shows her, cell phone glued to her right ear, 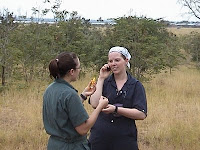 chatting with her family back home in Canada while friend and class mate Jessica Paterson looks on and nibbles on a banana.

The photo was taken during a break from work, and after we had visited the village of Kasenyi, which you can just see in the background. We had been there after working on Uganda kob as part of a small research program into the status of brucellosis in the park, and it was at the village fish landing that we were mobbed by small children who wanted not only yo meet us, but to have our empty water bottles.

It was Jessica who took this picture of a gaggle of kids around me and my camera as we shared a laugh about them appearing in video camera screen, where they had been watching themselves.

After she graduated Nif headed for Australia, where one of her uncles farms, and there she met and fell in love with Paul Wyman. They came to Canada for the wedding, which was held in the pretty prairie town of Minnedosa, only a few kilometres from the family farm, and the party was held in a Quonset on the farm.

Now we are further south, visiting our grandchildren in Minnesota and Sioux Falls. Back home next week.
Posted by Jerry Haigh at 6:08 AM