More book signings yesterday. Red Deer Alberta and now Lloydminster on the Alberta / Saskatchewan border, although I am about 1 km from the border itself in a shopping mall. Most annoying, the mall has no wireless Internet. Now that’s weird, at least it is in 2008, so I will have to wait until I get home to actually get this on to the page.

Apart from book gigs I have been reading the proceedings from the Wildlife Disease conference, just to see again what has been going on. One of the highlights of these gatherings, every year, is the full day devoted to student papers. Not only are the students highly motivated, because they are in competition mode for cash prizes and prestige, but because they show us oldies what is going on at the cutting edge of our discipline.

For instance there were several papers about reindeer, a favourite species of mine, and one I have worked on in Finland and Mongolia. Dr. Sophia Papageorgiou, a doctoral student at UC Davis has spent two work seasons in the high mountains of Mongolia, among the Tsaatan people and their reindeer, of whom you can read more here at the Itgel Foundation web site. 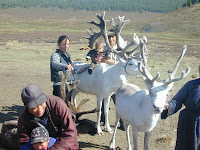 These pictures show the close relationship between the people and their animals. Sophia was studying one of the diseases that she is working with for her thesis. We had not met before, but I knew that she was there, and she knew that I too had been there. In my case it was three years of field seasons trying to see what is going on disease-wise with these fascinating animals. They are ridden, used as transport animals, milked and much loved.
Posted by Jerry Haigh at 1:54 PM