A recent posting on the Wildlife Disease New Digest blog, which appears two or three times a week as a listserv item (here is the URL http://wdin.blogspot.com/) carries a series of quotes and pictures that highlight the world’s growing problem with plastics. Many brief reports on the blog carry links to full stories on many subjects. The plastic one can be seen here. It opens with a quote from The National Geographic News of Sept 2003 that carries this blunt message:- Data released by the United States Environmental Protection Agency shows that somewhere between 500 billion and a trillion plastics bags are consumed worldwide each year.

The posting goes on to quote Jared Blumenfeld, Director of San Francisco’s Department of the Environment and states that There’s harsh economics behind bag recycling: It costs $4000 to process and recycle 1ton of plastic bags, which can then be sold on the commodities market for $32.

These quotes are followed by numerous grim pictures of plastic clogging up our cities and killing untold numbers of wild creatures in many ways.

Of course the authors do their best to offer a solution, pointing out that if only one person in five in the USA were to stop using plastic bags the reduction in waste would be absolutely huge – perhaps as many as 1,330,560,000,000 bags in our life time. They list several countries where plastic bag use has been banned – most notably in Africa, Rwanda has led the way

My own take on this problem appears in The Trouble With Lions in chapter 15. I quote:
We occasionally passed through villages whose chief characteristic was masses of thorn bushes highlighted by what have been euphemistically called Natal Poppies. The real reason for the colour is the accumulation of plastic bags, mainly black, which have blown from the ground where they have been carelessly dropped and have caught in the thorns. As the bags are virtually indestructible, the number of “poppies” continues to increase; moreover they seem to multiply of their own accord, as they gradually shred, so that one large bag becomes several small strips, all caught up in the thorns. An ugly sight.
In an interesting example of parallel evolution, Natal Poppies have sprung up all over Africa, and have become a common sight wherever one goes. A more generic name might be African Wild Flowers, as we have seen them in every African country that we have visited in the last fifteen years. Eventually they either shred themselves so small that they cannot hang on to the trees, or end up becoming the major visible form of garbage lining village streets. What a pity that they lack DNA and cannot propagate into useful bags every year or so. Since that time an attempt at control of this situation has been made, by making the giving away of plastic bags illegal in South Africa, but Markus (Hofmeyr) tells me that it has not had a noticeable effect on the flower crop. 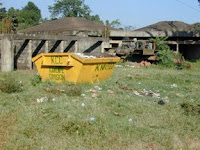 The situation has hardly improved in the ten years since we learned the cynical nickname. Vast amounts of plastic clog up systems in most countries and recent reports indicate that even in Canada people are beginning to feel the grip of the man-made monster. In Uganda it is almost impossible to make a purchase without the item being stuffed into a small black plastic bag, called a Kavera. The bags end up in roadside garbage heaps and may be sporadically picked by an antiquated dump truck that drives off with its contents dribbling on to the road. 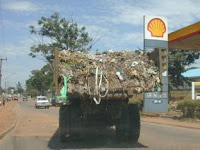 The garbage piles are burnt from time to time, sending a plume of foul-smelling, choking toxic fumes into the air. It is hard to know which is worse.

An even newer posting on the Wildlife Disease New Digest blog concerns the effects of plastics in quite a different way. A report here suggests that the a breakdown chemical of plastics causes a fatal condition in lobsters called shell disease. Hans Laufer, the lead scientists on the study thinks that alkyphenols derived from hard plastics may be interfering with the ability of lobsters to develop tough shells.

It is difficult to see our way out of this one. A lot of people need to take a lot of action, or else our grandchildren – and their grandchildren - are going to inherit a world that we would not even recognize.
Posted by Jerry Haigh at 9:05 AM

Good question Stamperoo. It sure sounds as if it might, but I don't know. I'll ask my Ugandan colleagues, but it may just be a word in one of the local languages. It is not Swahili, although it would make sense if it were, as Swahili, like most Creole languages, borrows & adapts where it can. For example, Doctor (eng) is Daktari, and a diesel engine (eng) is Tinga tinga (sound it out repeatedly and you'll see the connection.