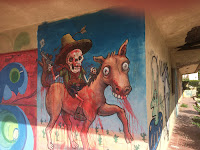 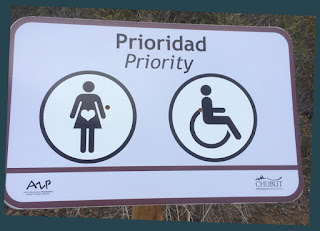 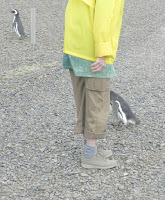 Then it was off to the bus station for another overnight ride north. Next stop Coronel Suarez.
Posted by Jerry Haigh at 3:32 PM

Great post and lots of interesting info. Love the photos. We are off to our very first visit of the USA in June and looking forward to seeing different birds and animals. Hope you are well Diane

What a wonderful trip! I've been to Puerto Madryn and camped at Puerto Piramides more than 25 years ago! I would be interested in knowing if the colonies of sea-lions got bigger or shrinked. Glad your rental car experience was better than in Bariloche, where you stayed at the same hotel as the Obama's.

Thanks Diane and Laura. The wildlife sightings in the US will very much depend on where you are going. No doubt the Obamas took note of our recommendations :). And on the sea-lion numbers, I'm afraid I have no idea and have no idea how to find out.

Wish we could have been there, Jerry, but your descriptions make it feel as though we were. And your last photo verifies what we've heard but never had appreciated: that the colors of the secondary rainbow are in reverse order. Thank you! (You were quite right about the foolish narration on the National Geographic piece!) We've experienced penguin indifference in a few locations, too. So easy to wonder "what are they thinking"; when, in fact, humans can not know "how" the other animals are thinking, what their world views are. You are certainly bringing many elements of Nature into clearer focus with your words and pictures. Thanks!

What a fascinating place! Great pics and blog post Jerry. You continue to lead such an interesting life 😃

Great post, Jerry. Sounds like you are on a wonderful adventure. Pictures of Jo with Southern Right Whale skeleton and being blithely ignored by a passing penguin probably my favourites.

This is clearly a wonderful adventure Jerry & Jo! Thanks for sharing it for those of us who do not use face book.
Bert and I are off for our own, much drier, Moroccan adventure next. We will learn some day how to share in such an appealing way.