A trip to the Argentinian Andes - part one

Back to blogging, after a hiatus of eighteen months. My excuse?  I was working hard on a new book. This one about work in Canada. Title: Porcupines to Polar Bears.

There are stories from the Western College of Veterinary Medicine, the Forestry Farm Zoo in Saskatoon and the wilds of Canada.

As I wait for the release in May I can write about the trip that my wife Jo and I took in January and February to Argentina. There are so many memories that I’m going to start with the time had in Patagonia. To get there Air Canada took us to Santiago in Chile. After that a bus and boat trip across the Andes took us to the town of San Carlos de Bariloche, conveniently known as Bariloche in the Andes. We had booked into the beautiful Llao Llao hotel a twenty-minute bus-ride from the town.

We arrived on the 25th of January, known world-wide wherever Scots have ended up at Robbie Burns day.

We do not participate that poet’s traditional haggis-based supper as it happens to be our wedding anniversary. In this case the 47th.


It was great to find that the concierge had acted on my emailed request to have roses on our table at dinner-time. Jo knew nothing about this arrangement. It was a special moment to see her reaction.


Next morning we began to explore. There were interesting Ashy-headed geese , with their russet breast feathers grazing on the lawns and a great view of lake Nahuel Huapi below the hotel. 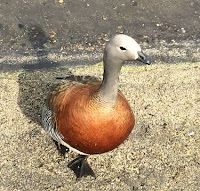 The spectacular view of the Andes, and the snow-capped peaks, gave us the opportunity to sit and relax on the lawn below the hotel beside the lake. It is huge. It  covers five hundred and thirty square kilometres and its shore line stretches three hundred and fifty-seven km.

In Bariloche, to our dismay, car rental is brutally expensive. $200 (US) a day for a very basic stick shift Chevy! There wasn't much choice if we wanted to explore.  Even at that price we decided to hire one and head north along the seven lakes route. There were stunning views, good restaurants and interesting things to do.

From Bariloche we headed north to Villa Angostura, here we stayed at the Sol Arrayan  hotel, again on the shores of lake Nahuel Huapi, which is huge. The views of the Andes from the hotel and the shore are spectacular.


By this time we had learned that in Argentina the correct pronunciation of a double ‘L’ in any word is not, as we expected, a ‘yao’ sound. The two ‘l’s sound as ‘sha’. So, our next stop in the trip was at ‘Visha’ Angostura.

There were two interesting treespecies that we saw in Villa Angosturs.  Right outside the hotel was an Arrayan tree, with its rust and yellow bark. It grows up to 15 metres. It is a member of the myrtle family, is an evergreen with fragrant flowers and is limited to the central Andes between Chile and Argentina. The other tree(s) were a mass of Coihue standing straight as an arrow, up to 45 metres tall. The largest one on record had a girth of 8 metres.  Their most striking feature is the absence of any branch for the first twenty metres above ground.


Next morning my fascination with birds and their photography was further excited when we saw a pair of black-faced ibis on the lawn. There are at least ten species of ibis in South America, but this is the only kind we met.

I was somewhat astonished to see bronze or rock statues of red deer in the communities. This version is depicted in full rut, neck stretched, roaring his power and ardour to one and all. The real rut is in  autumn, March in Argentina, so the hills may soon resonate with the grunts and gurgles.

Have a listen to the sounds that echo across the Scottish Highlands in September.

I was aware that these creatures had been exported to South America at some time early in the 20th century but I did not realize that they had become iconic and more celebrated in art forms than the native deer. We saw candelabras concocted from interwoven antlers and the standard wall mounts in most hotels.

One of the natives is the pudu, smallest member of the deer family that stands, at most, fifteen inches (45 cm) at the shoulder and weighs 10 kg. The other is the huemul, critically endangered throughout its range, mainly due to human activity and competition for resources with those cervid foreigners. There are some signs of recovery of this situation, but they are not out of the woods yet.

Thence to the town of San Martin de los Andes (abbreviated as San Martin). It lies on the shore of the lake of the same name. This lake is more or less the same size as Nahuel Huapi. San Martin is a favourite destination for skiers and has a good ski lift system just south of town up a winding gravel road.

The downtown area somewhat resembles a European mountain resort, with many buildings of log construction and window boxes.

The architect of pub, no doubt tongue in cheek,  has the front end of a VW micro bus embedded in the upper front wall. Happliy this 'crash' did not adversely effect the Warsteiner beer, a local brew.

For the folks who do not speak Spanish here is a useful tip, an essential addition the vocabulary for the beer drinker.  A craft beer, or one made in a micro brewery is un cerveza artesanal.


It was time for dinner. We had decided to double up and have a meal a restaurant advertising food and a tango show. Jut inside the door stood a large rack of wines. As we stood there a waiter told us that there would be no tango that evening.


The atmosphere was ideal with low lighting. The menu looked reasonable so we decided to have a meal anyway. Steak was on the menu and there were pasta dishes.

Next came a surprise. Only one small glass of water, from the tap, which we favour, was available. After that it had to be bottled water.

There were hitchhikers outside every town we passed through. One of the most interesting encounters was with an Australian couple in their thirties. They arrived at the same hostel as us and we fell into conversation. They are inveterate cyclists. One of their less adventurous trips had been a ride from Barcelona to Berlin. That does not sound too arduous for the dedicated,  but these two were traveling with small children, a four-year old and a toddler of eighteen months!


Our journey continued. Next stop a volcano with a history and a folk tale.
Posted by Jerry Haigh at 9:15 PM

Sounds like a great trip, Jerry! I'm taking notes for when I someday venture down south!

Give it atry. There are so many different things to see and learn. I went to Brazil about 20 years ago for a confernee. After that I spent a week in the Pantanal, a swamp the size of England! Wonderful birds and half an hour watching giant otters playing in the river. Magic!