A television series made in 1967 and 68 called Cowboy in Africa was shot in Kenya. It led to a Hollywood movie, starring Chuck Connors playing world champion cowboy Jim Sinclair. You can see a YouTube clip for the opening scenes here. (WARNING The scenes are not exactly animal welfare friendly). In my rating system the movie would not score many stars, if any. There used to be "B" movies that were shown before the main event. This one might not have even qualified for such a position.

My friend Tony Parkinson, with whom I worked on several projects through the late 60s and early 70s was not only the animal advisor but also the film double for several scenes that involved animal capture. 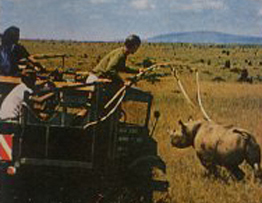 Below left Tony appears in an old Candanian Club whisky advert shot in the days before drugs were used to capture rhino. I began workingwith him a few months after the scene was shot.

In almost all of the roping scenes in the movie it is Tony, not Connors, who is on the horse and twirling the lariat. He learned to use one from the real cowboys who also came on the set and worked in several scenes.

One of the animal stars was a rhino that Tony had captured earlier and held in a pen for the movie scenes. Unfortunately, before the filming was over, the rhino broke his horn off very near the base and so there was a bit of a crisis. He could no longer perform and be accepted by the audience. Solution? Well, Tony had a second skill. He was a boat builder and skilled craftsman. Building a fiberglass replacement horn, and gluing it on with a 5-minute epoxy resin (a version called Araldite was the only one available in Kenya at the time) was no problem.

Fast-forward 45 years and we have more dummy rhino horns being built, but for an entirely different reason. Nowadays museums are having to resort to subterfuge in an effort to deal with theft. In another case in South Africa a would-be thief was fooled by more fiberglass, in this case it was an entire synthetic head, which is now hornless.
There have been recent convictions (and some jail sentences) for other would-be and successful museum thieves in England, Spain, and Germany but in these and no doubt other cases the horns were real.


The most impressive sentence was handed down in South Africa, when a Thai man named Chumlong Lemtongthai was convicted of rhino poaching linked to prostitution and sentenced to 40 years.

The material is so valuable (double the price of gold) that the temptation is obviously severe.

Next week I will take a close look at the new(ish) efforts at prevention, including reports from Swara the magazine arm of the East AfricanWildlife Society, which arrived in the post yesterday.  I need time to organize my thoughts on these issues and of course to prepare the goose for Tuesday’s lunch time bash with family.
Posted by Jerry Haigh at 9:58 AM