There has been a lot of recent traffic on blogs, Twitter, Facebook and Linkedin about lions, lion killing and the overall subject of lion conservation. The latest in a long line of killings occurred just 15 kilometers from Nairobi in the village of Kitengela, where six lions were speared to death after they had killed some livestock. There were two known females and their cubs, two juveniles and two young cubs. They had come from Nairobi National Park.

I say the latest because this is, as I have written elsewhere, it is another skirmish in a long-running war.

What makes this story different is that the animals were speared to death in the presence of three armed Kenya Wildlife Services (KWS) wardens after they strayed into a homestead and killed 13 sheep and goats. Different lions killed another15 goats in a nearby village.


The nuts and bolts of the Kitengela event can be summarized as two conflicts running side-by-side. There is the lion x livestock issue and then the public x government issue. The villagers were angry and vengeful because they consider that the government, in the guise of the KWS, had reneged on the promise to pay compensation at a reasonable rate.  The KWS staff were angry because, as quoted by the Star newspaper, an angry Nairobi National Park Senior Warden, Mark Cheruiyot, expressed shock at the wanton slaughter of the lions.

There have been delays in enacting the bill to raise compensation, and those delays tipped the balance as about a hundred the young men of the village collected together, armed with spears and machetes, and refused to obey the three guards.

The story went world-wide and another report featured on a National Geographic site where comments made by a few readers made it clear that the issues in Africa are simply not understood by people who have not experienced this sort of depredation. I am not going to post any pictures of dead lions this time, but if you want to see them, and also watch three videos, you can visit the site. Under the banner headline EXPLORERS JOURNAL blogger Luke Dollar uses the emotional title THE KITENGELA SIX: Outrage over lions killings in Nairobi. He cautions about graphic videos.

The story was filed by Dr. Paula Kahumbu, blogger, tweeter and active conservationist with Wildlife Direct . She is one person among several who is trying to get more attention to this issue.

As government procrastinates, human populations numbers spiral on up and residents get ever more angry a solution has to be found. Nobody, except perhaps a livestock owner who has lost his herd, wants lions to disappear, but there is not doubt that they are doing so at a steady rate.  Where forty years ago there were 20,000 in Kenya there are now less than 2,000.

The Maasai are just one of many African tribal groups have a very long tradition as pastoralists and value their cattle above all else in their lives. Some elders consider the cattle to be their bank accounts. While the Maaasai history included the ritual killing of lions as a rite of passage for young men into manhood in a ceremony called Olimayio almost all of the current wave of lion killing, be it by spear, gun or poison, is for revenge, known in the Maa language as Olkiyioi.

It is not just the Maasai. In December 2011, just after I spent three weeks with my family in Kenya, residents of Kitengela also took matters into their own hands in a 9-hour operation after three lions killed two cows seven donkeys and nine goats in just four days. As reporter Aby Agina of Nairobi’s NTV put it in this video “After enduring endless attacks on their livestock by roving lions residents of chose to bring this to an end. Armed with spears and machetes...” I’m sure you get the drift.

Agina also stated “The killings come after failed attempts by area residents to have Kenya Wildlife Service take action. On camera he wraps his story with “Human wildlife conflict has been and continues to remain a thorny issue in the tourism sector. The killing of wild animals by locals will deny Kenya the opportunity to compete in the global tourism market. Even as locals continue earning revenues from the local market, the question begs, ‘when will this stop?”

Paula Kahumbu is not the only one trying to alter the decline. The organization with the longest history on this battlefront is the Lion Guardians that was initiated by Dr. Laurence Frank of the University of California, Berkley. He has one of the most active predator research programs anywhere in Africa. Frank has been has been studying and trying to alleviate the ongoing conflict for over thirty years in two areas of Kenya. The most high profile is in Maasailand at the foot of Mount Kilimanjaro.  You can read the annual report of the Lion Guardians here. Part of that program involved very active participation of Maasai moran who work in just about every aspect of the program and the latest event has been to award outstanding young men who have contributed in several ways to the program at an annual gathering. 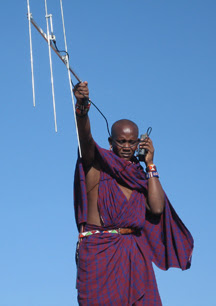 The Lion Guardians program has several components. Among them are radio collaring, GSP and radio tracking of individual lions (and therefore the prides they live in) and education. This photo, taken by the director of the program Dr. Leelah Hazzah, shows moran and Lion Guardian Mokoi using radio tracking equipmentto check on one of the lions in the Amboseli area.

They have gone so far as to produce a DVD in the Maa language and take it to communities to show them how to deal with their nemesis. One of the key elements of the education has been to show the herders how to protect their animals at night by building better corrals (aka bomas). One way in which lions get at cattle is to panic them to such an extent that they break out of the traditional thorn bomas. Then they are easy picking.  If the fence is robust enough the cattle cannot break out and most of the problem is resolved.

Laly Lichenfeld is another person in East Africa who has been actively engaged in efforts to cut down on livestock depredation. Her work has been in Tanzania and in this video she describes how living fences of planted Comiphora trees combined with chainlink fencing have made a terrific impact as they grow stonger with time.

Quite a different approach has been taken by a bright young teenager named Richard Turere. I wonder if you can guess what he came up with. It involved an old motor cycle indicator switch and some LED lights. . You can of course check it out in this short TED YouTube piece. His efforts were so impressive that he has won a scholarship to one of Kenya’s most prestigious schools

One can be certain that lions will continue to kill prey. That is what they are all about. If the prey continues to be livestock then the lions will also be killed by angry herdsmen. A solution needs to be found, and everyone involved needs to take the matter seriously. 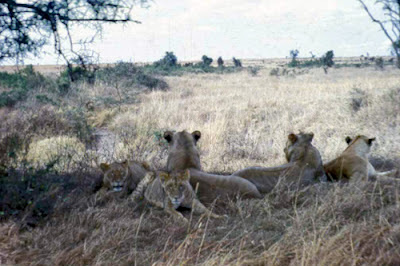 Wouldn't it be nice to think that this scene, a picture I snapped in 1965 in Nairobi National Park could be repeated today without wondering if the group was going to be killing someone's cattle and suffering the consequences.
Posted by Jerry Haigh at 10:28 PM

Hi Jerry, thanks for sharing this moving account on the lions. Congratulations to Richard, a truly innovative young boy. Ludwig et al need to read this piece!! I have picked something for our women group at Katunguru B in Queen Elizabeth National.

Hi Jerry, thanks for sharing this moving account on the lions. Congratulations to Richard, a truly innovative young boy. Ludwig et al need to read this piece!! I have picked something for our women group at Katunguru B in Queen Elizabeth National Park.