Killdeer on the Drive

For two of the last three years we have had the privilege and pleasure of hosting a nesting pair of killdeer on our driveway, right in front of the house. Or perhaps they are hosting us. We have been able to watch them from our picture window, and from late May in 2010, through the month of June and this year, up to the 5th July we have had the binoculars handy. 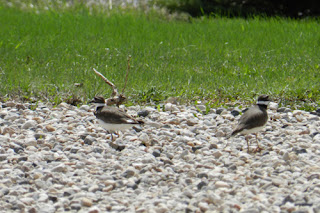 The process begins with the arrival of two adult birds. With little short burst of running they scamper hither and thither, stopping now and then to pick up something from the ground, presumably an insect. Every now and again one or other (there is no sexual dimorphism so I have no idea who is who in the sex stakes) seems to settle into a potential hollow in the gravel and see if the body can be wiggled into a comfortable spot.

Then things get serious. After a few brief bouts of mating the birds settle on their chosen spot.

Here they will sit for about a month, changing the guard, just like at Buckingham Palace, every now and again. We have no Alice to tell us about it, or Christopher Robin to go there with her, but we have checked every morning, even before putting the kettle on.  In certain lights it is quite difficult to find the nest, especially if the bird is sitting with its back to the window. Luckily we have no shortage of dandelions on the drive and they give us the marker. 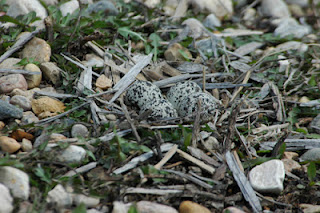 Our drive way is all gravel so the choice of a nest site has been ideal for these little birds. The eggs are so well camouflaged that one really has to look closely to see the black and light grey mottling and distinguish it from the surrounding array of various-sized stones. In fact one tell-tale is that the three or four eggs all have the same pattern, whereas no two real stones are either the same size or colour.

Suddenly one morning we see the first chick. 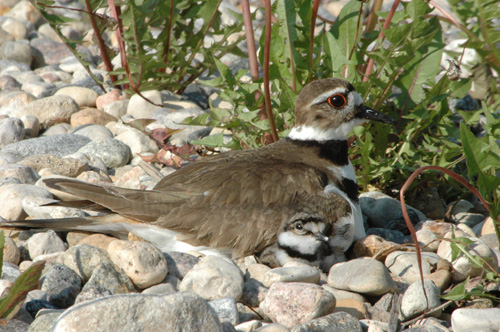 Here it is peeking out from under a parent bird.It seems to vary from wide awake to snooze quite regularly, but within a day it is out and about, foraging in the rocks and rushing about just like its parents.

Then there are two, three and eventually all have hatched. In 2010 we did note that the chicks came back to the nest at dusk and snuggled under a parent for the first couple of days. Within another two or three days the nest site has been abandoned and the birds may be anywhere on the drive, in the grass, on the flowerbeds or even out on the road a couple of hundred metres from the original nest site.

Sixteen days after hatching we have seen the first attempts at flight. By then the chicks have more than doubled in size and are about half as big as the parent birds.

Charadrius vociferous. That is the name that taxonomists have given to this little member so the plover family. The scientists are right on, and at no time are the birds more talkative than when they want to lure any potential threat away from their nest.

They also indulge in the characteristic plover distraction behaviour, trying to convince us that they will make easy meat with that seemingly broken wing. It is not just us, as they have grown accustomed to our comings and goings to the garden, but much more important for them is the unwanted attention of crows and magpies. 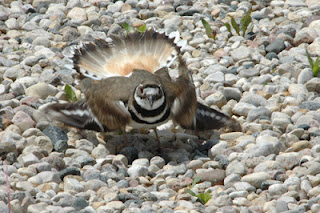 Of course it is all a sham. Once they have led us away from the nest or the new chicks they will suddenly take off, squeaking away and saying, according to some folks, killdeer. It is a sharp high-pitched note and I cannot get the word killdeer out of it, parse it as I may, but no worries.

That which we call a rose by any other name and so on.

What fun and great photos. We have just raised a family of Black Redstarts in the garden. Such fun watching them. Diane

As you say, fun watcbhing. We have wrens in a nest box near the house and bluebirds or tree swallows using the sewer pipe nest boxes I blogged about a while back. The killdeer are fun becaseu they are right our fton and not hidden in the bushes or nest box.

What a lovely post, illustrated abundantly! I have done a bit of work with waders down here in NZ, and even have a rare Shore plover individual named after me... an honour indeed.

Thanks Katherine. This year something (we think a feral cat, or maybe a garter snake) got the kildeer eggs before hatching. Sad and something you are all too familiar with in NZ. Can you send me a picture of the NZ plover and tell me where it was taken. We have been to NZ several times (work with deer) and I have done one chapter in my last book of moose in NZ.