Have just returned from a great trip out to very western most part of Canada. We got as far as Tofino on British Columbia’s Vancouver Island after visiting friends along the way. I also did a talk on various things related to wildlife for the Victoria Academy of Veterinary Medicine. Most present were small animal practitioners, but there were a few wildlife rehab folks there as well. I may have surprised some of the attendees by suggesting that the feeding of urban deer is simply a bad thing.

Of course it is bad for the humans in several ways.

Perhaps the mildest ”bad” is that the deer eat people’s gardens. Not just veggies, but also ornamental flowers. Most of our friends on the island have erected deer-proof fences and on the offshore Saltspring Island I think everyone has done the same.

Another concern is the potential for Lyme disease to crop up in humans. Here is an authoritative site about it. The deer do not carry the disease itself, but they do carry the ticks that spread it. The more deer, potentially the more ticks. There were ten reported cases of this nasty condition in humans in British Columbia in 2011.

Traffic accidents are of course a major hazard. There are YouTube videos to show it.

Habituated or tame deer can be very dangerous. The females are especially so when they have very young fawns.  In this clip shown on TV news, a doe attacks a pet dog in the Victoria suburb of Sannich. Imagine if that had been a toddler.

Dr. Jay Rolfe, whom I had not seen since his graduation from the Western College of Veterinary Medicine about 25 years ago, related how a doe had emerged from hiding and flattened a young 18-year old male. In the city of Fairbanks, Alaska, a cow moose attacked and killed a pedestrian.  Newly calved wapiti are very aggressive and are a real hazard in Jasper National park. They seem to view dogs with great dislike and will attack them. I am convinced that small children (say under ten) are seen as potential predators.

If does are potential bad news rutting stags or bulls of any member of the deer family become incredibly dangerous during the rut. Each fall there are reports of so-called tame deer, usually white-tailed deer, changing almost overnight from “stroke-my-nose-please, I-love-it” to crazy killers hell-bent of destruction. One client of mine was treed for several hours by such a buck after it hit him from behind. He was lucky to escape up a nearby poplar with torn jeans and some dramatic bruises.

As the person who posted this YouTube video wrote:

This is video of the elk rut in Estes Park, CO in the fall of 2009. The elk are in a frenzy, and don't care about people around!

I wrote this in Of Moose and Men.

My own scary experience with an enraged “tame” bull occurred with three hundred kilos of mind-bent, testosterone-crazed, but luckily de-antlered wapiti. He was part of a research group that I had been working with for several months. I used to visit them almost daily but had missed seeing them over the first weekend in September. On the Monday morning I entered the pen without taking due note of the changes that had happened. The bull came straight for me and pinned me against one of the uprights in a corner of the yard. As long as I stood fairly still he simply leaned on me, albeit with some force, pressing my back against the post so that I could feel each of my vertebrae creating a dent in the wood. If I tried to move he leaned a bit more—quite a bit more. I wondered if I was ever going to get out of this mess, but luckily I was with one of my students, who was outside the pen, and so I called out to him to help me. He had the presence of mind to grab a handy length of two-by-four, lean around the nearby gatepost, and give the bull a good thump on the rump. Happily the bull turned to face this new threat, giving me a chance to break the world’s standing high-jump record over the three-metre fence.

The student was Jay Rolfe, but I had failed to catch up with him before publication of the book and felt I could not use his name without his permission.  He certainly saved me from some serious injury and may have saved my life. 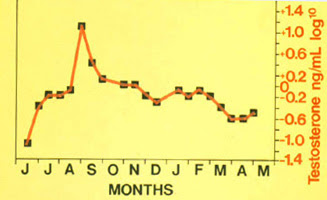 This sharp testosterone peak is central to the whole business of the rut and in this graph that I developed almost 30 years ago from work I did on wapiti (North American elk) I show how quickly it happens.

In wapiti the jump takes place about the beginning of September. In other species the date changes, but not the event. If you look closely at the scale you will see that this is a log scale. There would not be room on this page to show the actual rise in real numbers. It is about 1000 fold!

It is not just tame animals that will become aggressive. On the eleventh tee of the beautiful Lobstick golf course in Prince Albert National park a bull wapiti once took over the ground. Wise golfers used ”local rules” and teed up a hundred or so yards down the fairway. I don’t know if the scores for the shortened hole improved, but I doubt it. Golfers would have had heightened excitement levels after a meeting like that. The steadiness needed to play god golf might have been suspended.

I shall explore how the development of an urban deer culture, and especially the feeding of urban deer is an animal welfare issue in my next post.
Posted by Jerry Haigh at 6:53 PM