In my last post I discussed the risks to humans when deer move into urban areas. They can become a pest and a risk to humans, but also a risk to themselves.

When I mentioned traffic accidents I was referring to damage to people and their vehicles, but of course the deer are usually the losers in these encounters. It all depends upon the size of the deer. A mule deer fawn may not damage a car at all and is unlikely to survive the encounter.  A moose will likely do terrific damage to the car or truck and may survive, but is just as likely to be severely injured and suffer before someone puts it down.

A much more serious problem for the deer arises when well-meaning folks begin to offer supplementary feed to these creatures. Of course for the people there is likely a perceived “feel good” emotion to the action, which makes it very difficult to stop them doing it. After all we all like to feel good. It’s a sort of “Disney” effect.

Few if any such folks realize that they are upsetting the natural order of things in several ways. These fall under the headings of habituation, prolonging the breeding season, inappropriate diet and increased disease potential.

Habituation
If deer, particularly the females, deliver their young in a certain area they are likely to see this as a “home” area and deliver in the same place year after year. Their fawns or calves, raised in that area, are quite likely to repeat the whole thing, but not of course in exactly the same garden or park. They will disperse a little when their mothers reject them when new youngsters appear each year and so the “occupy town” effect spreads little by little. The deer become habituated and pretty soon a “herd” of them are searching for food, mates and a predator-free place to live. Just about the only predator they have to face is the motor vehicle.

It is not just the females that fancy town life. The males also enjoy the relative safety, easily found food (more of this below) and of course, for the brief (4-6 week) period of the rut they have access to lots of females. This is where one of the major problems begins to appear.

Late breeding and birth seasons
In natural systems the males and females disperse after the rut. Indeed they may have completely different home ranges, miles apart in some cases. If the males have become habituated and the females do not have anywhere different to go the two sexes are likely to encounter one another on a regular basis, maybe more than once a day. Some of the females, especially the younger ones that are not yet big enough, may not have been bred or may not have conceived during the regular rutting time. In either case they may come into heat again and again, which inevitably brings the males into contact again. Those pheromones wafting on the breeze are powerful aphrodisiacs.

The net result is that the males hang around, perhaps for the chance to breed, or maybe just for the grub. This unnatural situation is stressful for both sexes.

In the males the stress manifest itself in prolonged retention of antlers. In normal environments the antlers fall off naturally when testosterone level decline. However, other hormones, particularly steroids, can mimic the effect of testosterone when it comes to antler cycles.  Once natural steroid levels decline and the antlers drop the males are infertile.

If the breeding season is prolonged then of course the calving or fawning season is extended. That can be very bad news for the late-born fawns. 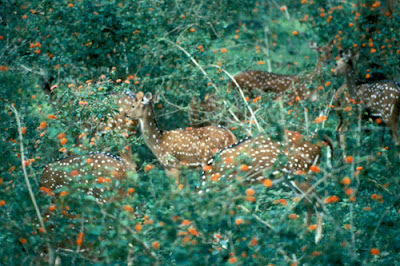 (Note here that I’m referring to deer with seasonal breeding patterns. Tropical deer like these chital or axis deer in India dance to a different drummer). There are eight does in the picture.Can you spot them all?

Of course the more late fawns that are born and survive until next year (some do) the more the breeding season is extended. It is a self-perpetuating phenomenon that can get worse over time.

Across Canada and indeed all temperate zones of the world, winter is a determining factor in the life history of deer. It may be the bone-chilling dry cold of the prairies and steppes, or the wet windy blasts of coastal regions of Europe or North America, but wherever it is some sort of protective mechanism is essential. For deer, the mechanism is to be born early and gain lots of weight and strength during the long summer days.

There is evidence that the dam’s milk may have lost some nutritional value when calves arrive late. Whether this is a seasonal effect or simply the fact that the spring and early summer forage has lost quality when those latecomers arrive is not clear.

It is not only the milk quality that is affected. Just as for the dam, the length of time before those green shoots become golden red or yellow to brown autumn leaves is reduced. As the leaves age they lose their nutritional value. All in all the fawn or calf simply lacks the opportunity to gain weight in preparation for the hard times ahead.

Late-born deer may not have developed the fat reserves or body size to withstand those winter conditions. This applies to deer of all sizes. Late-born moose calves, only six weeks behind schedule, seldom survive the winter. I once watched a late-born mule deer fawns fade and die over a few days outside our home in Saskatoon. At necropsy it had no fat reserves anywhere in its body, not even in its bone marrow.

Inappropriate diet
The country mouse and the town mouse cannot get along. One of the reason for that is that they are not used to one another’s feeding regimes. The same sort of thing applies to deer, except that for the urban deer there is none of the natural feeds available. Wild deer are real cafeteria eaters. They may browse or graze on upwards of 150 different plants over the course of a year. If they end up in town the array of feed is greatly reduced. Many of the plants with which they have evolved over tens of thousands or millions of year are simply not available.

They may end up eating poor quality, low energy, high carbohydrate feeds, especially if well-meaning people feed them bread and other “tidbits” like bread, apples, grass, alfalfa, and grains. Just like the Morgan Spurlock, the director and star of the movie “Supersize Me” they end up nutritionally impoverished.

Such diets lead to an ugly end. The deer can and do end up with grain overload, disruption of the rumen, diarrhea or impaction. Handling exacerbates the problem and they cannot be medicated or fed back to health.

All this leads to an end stage of severe metabolic problems, hypothermia, hypoglycemia, exhaustion and death.


The diets are not only impoverished, but the deer also run the risk of eating poisonous plants, some of which are grown in people’s gardens.

Azalea oleander, and yew are examples among many that may surprise you.


Diseases
The increased density, poor diet and overall debility expose the deer to a range of diseases that they would normally shrug off. Many of the deer show up with poor to extremely thing body condition, poor hair coats (even almost bald) and greenish soft to liquid diarrhea.

One example of this situation has been the arrival of exotic lice that parasitize the coastal black-tailed deer of Oregon, Washington State and Vancouver Island. This picture was taken from the Washington State information sheet on lice. Thousands of lice have been found on a single deer and not surprisingly the coats are in terrible shape.

The bottom line?
Curb your inner Bambi fixation. By encouraging deer into urban settings and feeding them remember that fawns will starve to death and many deer will die.

THIS IS AN ANIMAL WELFARE ISSUE