Another collection of pictures from Africa. This time it’s birds and more particularly, flamingos. With two exceptions they come from Kenya. The last two are from Uganda and Namibia. Even the Kenya ones are not all from the same spot. 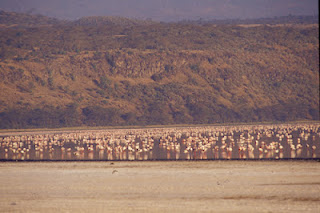 It is, or was, Lake Nakuru that was always famous for the masses of these striking birds. Indeed it was said that there were, at times, over a million of them on the lake. That has changed dramatically. I took this picture over 40 years ago, and there appear to be more birds than water.

On our visit there in December we saw very few, maybe a couple of dozen at most. 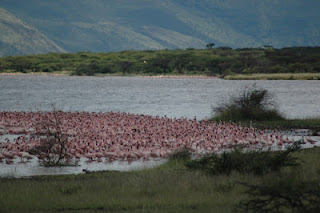 We did see thousands, standing, feeding and flying at Lake Baringo, the next-most northerly lake in the chain that appears in the Rift Valley. The storm clouds had gathered in dark masses about the eastern wall of the Rift as we stood and marveled at the sight. The photos at Baringo were taken by one of thre three of us with cameras. Our daughter Karen, her husband Robert, or me. 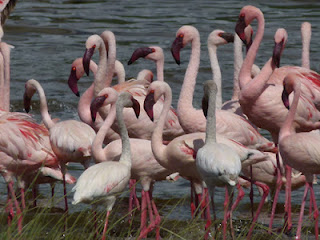 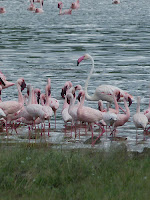 These pictures do nicely show the difference in both size and bill colour between the Lesser and Greater species. On the left they are all Lessers. The fully dark beak with its small dark pink spot near the tip shows clearly On the right a single Greater, with his pink bill and dark tip stands out. The lesser also has a pinker hue to the body feathers.  How obliging of them to stand so still for the camera.

I’m not sure if this one was feeling the cold, but he/she does seem to have a scarf around the neck.


They are truly spectacular when they fly as the colurs stand out. 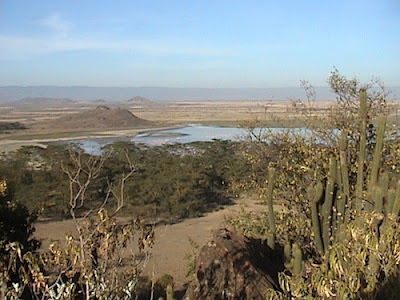 On previous trips we have also seen them at Lake Elementaita, the next lake south from Nakuru. The hill in the middle background is known as the Lord’s nose. The nasal shape does not show up well in this view, but the Lord name is a reference to Lord Delamere the famous, or infamous, English settler whose ranch, Soysambu, covered most of the land you can see beyond the lake, including the hill. Soysambu is now a conservancy and borders on Lake Nakuru National park effectively extending the area set aside for the purpose. 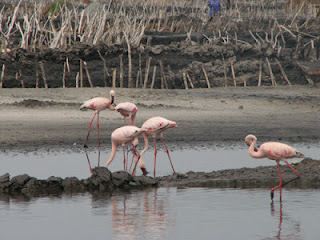 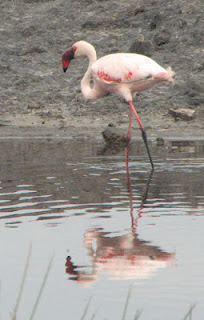 There are other lakes in the Rift Valley system, and of course the Rift divides into two arms. During our many trips with veterinary students to Uganda and the western arm, or Albertine Rift, we saw small numbers of flamingos in Queen Elizabeth NP, but not in the big lakes named in the 19th century for members of the British Royal family – they are Edward and George. We did seem them in the salt lake nearby, most frequently in Lake Katwe. The birds were never in huge numbers but perhaps because they saw so many humans mining the salt on a daily basis they were quite unconcerned about close approach. 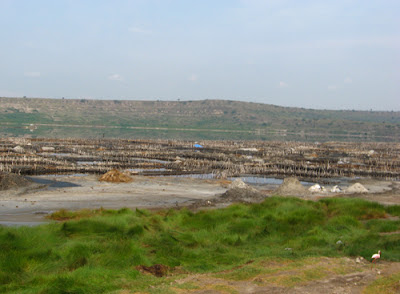 These pictures show a few of the saltpans that provided about half the village residents with their income. You can see a single bird at the very bottom right of this wide view of the pans. I can assure you that it has not been “Photoshopped” in. I even wonder if the photographer realized that she/he had snapped this single bird.

The briny water is trapped in pans about ten metres across and allowed to evaporate. As the salinity increases so the salt precipitates and can be harvested. You can see big piles of light or dark salt, some covered in plastic, stacked on the pan edges. The pans are individually owned and are traded for substantial sums of money or passed down in families. This is the only place in the world that I have ever visited where rain is simply not wanted. Indeed it is considered impolite to even suggest that the rainy season is approaching. Rain means less evaporation and the risk of spoilage or loss of a hard-won harvest. 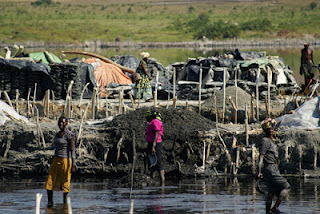 These pictures were taken by me or one of the 79 students who joined me on those memorable trips, but I have no idea who. We shared thousands of photos every year, so thank you someone. I wrote about those Uganda teaching trips in The Trouble With Lions.

My wife and I had not expected to see flamingos a long way further south, so, in 1997 we were pleasantly surprised when we saw them at Walvis Bay, wading, feeding and stretching in the river estuary at low tide just south of this Namibian city. The one at left centre is graciously stretching his wings to give us a spectacular view.

Great post with lots of interesting points. Thanks Diane