There are at least eight species of bustard (yes you read that correctly) in Africa and if you include the korhaans from southern Africa and its neighbours then the numbers climb to about a dozen. The largest of all is the kori bustard (Ardeotis kori) , which is certainly the largest bird on the continent capable of flight. 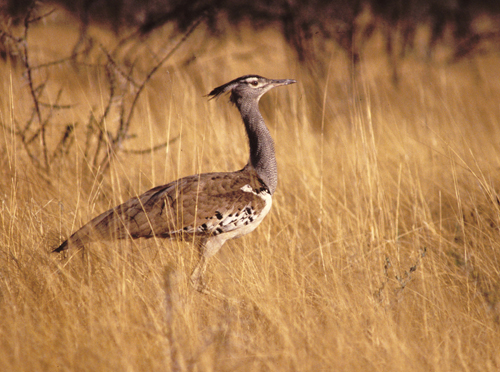 The males weigh in at about 13.5 kg, but may be heavier, even up to 20 kg. The largest specimens may top a metre in height. The females are somewhat smaller. I have seen them, usually as singletons, in many areas of Kenya and Uganda, as well as further south in Namibia, Botswana and South Africa. 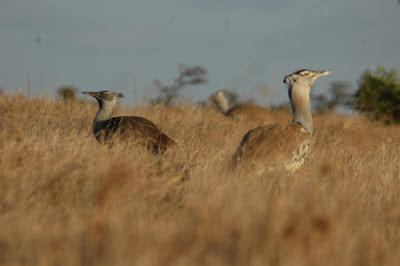 I saw these three together at Borana, which lies to the north of Mount Kenya. (Number 3 is in the background and the focus is fuzzy, but it is there!

They are grassland birds and only seem to fly occasionally. They seem to prefer to walk and as they do so one can see them searching for food. You can find a short Youtube video from Tanzania’s Ngrongoro crater that shows a pair of them.

My late father, who was a keen wing shot, described his efforts to bag one during World War II told me that it was very difficult to get them on the wing but on the one occasion that he did so, and got it, there was enough meat to feed the entire officer’s mess.

There is another very large bustard that ranges across Europe and into temperate Asia. It is known as the great bustard (Otis tarda) and there seems to be a lack of agreement among scientists as to which is the two is the larger.

Like other species they once occupied much wider ranges and we know that the Great Bustard occurred on England’s Salisbury Plain is historical times, having been extirpated in about 1832. An active program in the UK led to their reintroduction in 2004. One can visit the release site, details here. You can see footage of these huge birds at the centre by linking here. Perhaps the most striking thing about the film is the remarkable display by the males, during which the head almost disappears in a mass of white feathers that puff up from the throat. At the same time the tail fans out, again revealing a mass of white. All this is to attract females. I have only witnessed a bustard display once, in Kenya, but unfortunately I did not have a movie camera, so I cannot share it with you. 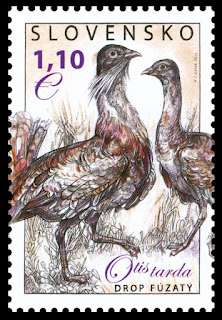 Wherever the great bustard of Eurasia hangs on, from Portugal eastwards, it only does so in small numbers, often in protected areas.  Much of the decline has been due to changes in agriculture and human development, not only houses, but roads and other infrastructure.

Great bustards also feature on stamps. The 1994 Hungarian 1.50 florint stamp showed a single bird and there was a 1.10 koruna stamp issued in Slovakia in 2011 depicted two great bustards. I found this image on a stamp website here.
Posted by Jerry Haigh at 6:56 AM

I have seen bustards in S.A. but I have no idea which ones! Diane

I'll try & post some more on smaller bustards in the next while, but I only have photos of a few of them.